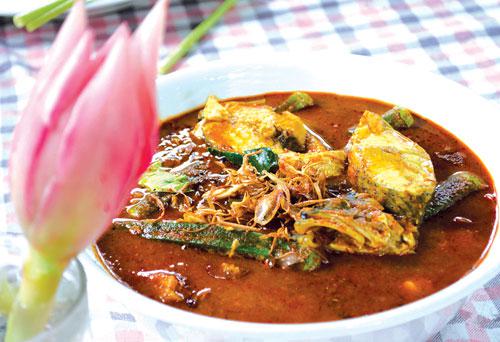 PHUKET: Right beside Kathu Waterfall, there exists a Phuket culinary gem. Krua Pailin, or Pailin’s Kitchen, is a long-standing establishment that has been serving authentic Phuket food to discerning locals for almost two decades now.

But what actually is authentic Phuket food? We all know of the Peranakan version, influenced by Chinese tastes – noodles and such – which is easy on the palette and therefore a good introduction to the local fares. On the other end of the scale, Phuket cuisine is marked by its heat, thanks to the copious amount of chilies used, a dominant taste that came to be known generally as “southern cuisine”.

Yet, between these two polarities there exists a middle ground largely ignored by the general public. I am talking about a wholesome and tasty local cuisine that makes full use of the land’s bounty – fresh fish and seafood, wild herbs and indigenous greens, flavored by local seasonings like shrimp paste, dried fish and, of course, lots of chilies.

All of the qualities above come together in dishes served at Krua Pailin, a garden restaurant right beside Kathu Waterfall. An institution in its own right, Krua Pailin’s unassuming but idyllic jungle setting edged on one side by a running stream belies its quiet fame; the path leading to it has been well trodden by numerous Thai celebrities, local government officials and both local and tourist foodies. At one time, Pailin’s shack-like kitchen regularly air-delivered its delicacies to a certain movie star in Bangkok who hankered after a southern taste.

The establishment owes its success to chef-owner Suwanna “Phung” Saetun. Having run the restaurant for 19 years, first together with her husband and mother-in-law, Phung is now a fully-fledged chef keen to maintain what she calls the “true taste of Phuket.” Such is her reputation that she has been approached by Thailand’s Iron Chef TV producers who have spotted her talent. “I’ll go when I am ready,” says the 39-year-old chef.

Phung is aware that Phuket food is an acquired taste, so she has prepared a few dishes designed to entice newcomers to this cuisine. First up is tom som phuk ruam, a mixed vegetable soup that explodes with natural goodness. Refreshingly light, the soup contains no less than ten types of roots and wild herbs. Tender galangal and banana stem vie for attention, while pineapple chunks and dried garcinia fruits add to the overall tangy note. The soup is not only wholesome but also, when eaten as part of a meal, acts as a foil for other dishes with stronger tastes.

Pla mong jian trakrai, or Mong fish slices with tamarind sauce, is an all-time family favorite. Here it is topped with a generous amount of lemongrass slices, julienne ginger and garlic. Phung sources the fish herself everyday from the fresh talad kaset market in town – so freshness is always guaranteed.

If you like crab, you’d surely enjoy pu phad manao, or chunky crab-meat in lime sauce, an intriguingly exotic and satisfying dish. More exotic still, and rarely found anywhere else on the island, is the Malay-styled toumee curry. This is slow cooked fish fillets in an aromatic sauce – its unique ingredient being petals of bright pink torch ginger flowers and is mild enough for everyone to enjoy. For those with a stronger palette, try kang prik hoi gun, a robust curry that combined seemingly incompatible ingredients of Andaman clams, green papaya and jeera, or curry leaves.

For the true food buff, try also wild krang mushrooms with garlic (suitable for vegetarians); roast ants’ eggs; and deep-fried wasps, among many more “jungle” offerings. Some dishes are only available during the rainy season and a few, like toumee curry, must be ordered in advance.

At Krua Pailin, you can expect Phuket country food at its best and a no-frills dining experience. But like any other top-notch restaurant, the sophistication lies in the careful attention to details like preparation, freshness and unusual ingredients.

So how about giving sweet-and-sour and green curry a break and trying something completely different?

The evolution of Phuket’s MAMILS