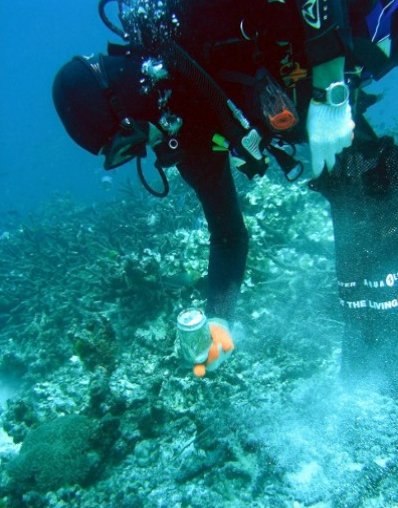 Tasked with bringing up the bigger debris and the 4.5 ton net in Banana Bay those on board Khao Lak Scuba Adventures Manta Queen III were obviously excited about the opportunity.

Divers with hundreds of dives returned to our boat after their first dive with enormous tyres and debris bags stuffed – all smiling like scuba divers after seeing their first lion fish, or game hunters with a prize Kudu in tow. And as day one of the event turned into day two, those smiles never faded.

Geoffrey Cole, trip leader of Khao Lak Scuba Adventures’ Manta Queen III:
“It went amazingly. Everyone deserves the same amount of congratulations for what they’ve done. Also, thanks to the Thai Navy for helping us out so much. Without them it wouldn’t have been possible to lift that huge net out of the water. Thanks to the fishing trawler as well, which came along and helped us out when we needed it.

“It’s a nice sight seeing that massive mountain of netting lifted off the reef and floating along. On the last dive you could see spots where things were, but had been lifted, and probably in two days you’d never know anything was there.

“Hopefully the next time someone is there, they will pick up a little bit, even when they are out fun diving.”

Matt “F5” O’Connor, free-lance PADI Instructor:
“This is some of the most fun I’ve had underwater since I was a student. It’s not all the time we get to play with lift bags and do search and recovery patterns. . .To put our skills to work and see the difference we made just from the debris on the back of the boat, it’s quite a feat for everyone here.”

Robert J Scammell PADI Instructor Examiner:
“I think it’s a great compliment to the dive industry of Phuket for everyone to collaborate and make such a successful event. The dive centers and dive store owners need to continue their relationship of being supportive of each other and the environment they want their customers to enjoy.”

Helen Maceen, PADI Course Director at Blue Guru Conservation and Diving:
“So we did three dives [on the 4.5 ton net]. On the first dive we went down to assess it. A lot of the net was caught on coral bommies, so we spent the whole of the first 50 minutes dive just carefully cutting it away so there was no damage [done to the corals] and [ensured that it was] free of marine life caught in it, such as sea cucumbers…[On] Day two, they sent in another two lift bags, including one 1,000 kilogram lift bag, and with all of [them] we were successful. I think that it’s great that so many dive centers and staff are giving up their time and boats to make a bigger difference than we all could individually.”

Kevin Black, PADI Master Instructor and Re-breather Instructor for Kiwidivers.com:
“The real point of being on re-breathers for a 90min dive was that it enabled us to sit at a deeper depth for the entire 90min and cover deep areas. It was actually surprising the amount of stuff, out over the sandy, that we could find and bring up. We turned up a purple Wellington boot, but I didn’t end up taking it with me because it had marine life living in it.

“It is often very difficult to decide if something is going to do more damage to the marine environment by bringing the alien matter that shouldn’t be down there up, or whether it is better to leave it down there as artificial reef. I think the trick would be to do cleanups more often, so you can get the rubbish while it’s fresh, rather than after its become part of the marine habitat.”

Tomomi Arakawa, Freedom Divers PADI Master Scuba Diver Trainer:
“I just wanted to help [even with sorting the debris brought up]. I think we should do it annually, which Kerry said will happen. I would love to join next year too. The highlight was to cleanup dive sites that we normally go to, so we don’t have to show all the underwater rubbish to customers.”

Niklas Konradsdal, Andaman Ocean Safari’s tour leader:
“Until we actually do something like this, you might not realize how much stuff is actually in the water – it opens your eyes. I think something like this needs to be done more often. It is getting done every now and then, but just considering the amount of the stuff they found – apparently not often enough.”

Renate Stein, Khao Lak Scuba Adventures PADI Master Scuba Diver Trainer:
“The amount of debris we found here was much more than I expected. And what’s even more, is the amount we had to leave behind. I would love to spend one week in this bay with a boat like this, a group like this, and just clean. There is more work to do.”

Andrei Zavarin, freelance PADI instructor:
“Seeing people working together in one direction because of one thing, to clean our sea – it’s awesome. And everyone is working for better dive sites – that’s why I love it. Look at every boat and there is tons and tons of rubbish, and all that rubbish that comes out, it kills less, so it definitely has an impact.”

Robert Coehoorn, PADI Open Water Diver:
“It shows that even on your sixth dive you can do something to get the oceans clean. And I reckon that this will happen again every year, but we might as well, every now and then, sacrifice one dive and clean some rubbish up. Everyone can do it, and I guess I prove that as brand new open water diver.”

Phuket Environment: Jellyfish are back in the spotlight