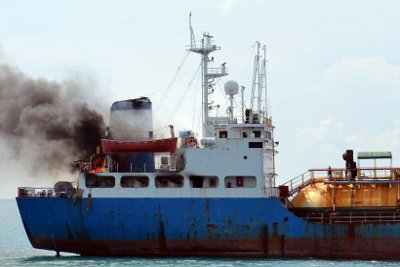 PHUKET: Damage to the liquid propane gas (LPG) cargo ship that caught fire off Phuket yesterday may reach up to 400,000 baht, the Phuket Gazette was told today.

“The communications room was heavily damaged by the fire. We believe that’s where it started. The radio and radar systems were damaged, as were a storeroom and one room in the crew’s quarters,” said Narudeth Kaewphakdee, general manager of the ship’s operating company Siam Marinetime Co Ltd in Bangkok.

The 80-meter long Kanthicha caught fire at about 8am, raising fears that the ship’s cargo might explode.

The alarm was raised by the only crewman aboard, who was on his way to the engine room when he saw smoke pouring out from the communications room on the second floor of the superstructure.

“There was no LPG on board. It had all been sold already, and the main tanks were empty,” Lt Col Prasert said.

The Kanthicha has been anchored 2 kilometers offshore from the Deep Sea Port at Ao Makham for about two months, said Col Prasert.

Mr Narudeth, from Siam Marinetime Co Ltd, told the Phuket Gazette that the Kanthicha had arrived in Phuket from Myanmar, where she unloaded cargo from mainland China.

“The Kanthicha was scheduled to depart Phuket today, bound for Sri Racha [on the Gulf of Thailand],” he added.