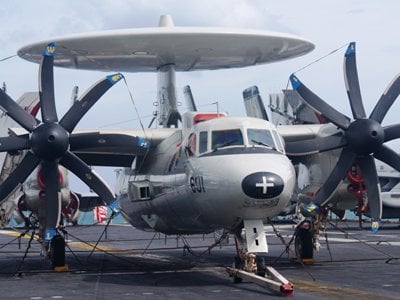 PHUKET: THE USS John C Stennis and USS Mobile Bay have docked in Phuket to give their complement of 5,350 servicemen and women the chance to grab some ‘R and R’ before possibly being re-deployed in the Middle East.

The Stennis is the seventh Nimitz-class nuclear-powered supercarrier of the United States Navy, named after Senator John C Stennis of Mississippi, who was dubbed the father of the modern Navy by former President Ronald Reagan, for his four decades of work with the Senate Armed Services Committee.

Speaking from the Admiral’s conference room aboard Stennis yesterday, Rear Admiral (RDML) Charles M Gaouette told local media: “We arrived this morning from Borneo and the greeting has been very warm. We’re here for rest and relaxation (R & R) and to discover this part of Thailand and to get to know the people and culture of Phuket.”

RDML Gaouette went on to note that next year marks the 180th anniversary of relations between the USA and Thailand. The commander also said that sailors will be able to visit all areas of the island and are not confined to a specific place.

A spokesperson from the ship’s communications department said that sailors will be engaging in community relation projects (COMREL) every day the ship is docked in Phuket. He said that a team led by one of the ship’s First Admirals, will help repair damage done to a local orphanage during the recent heavy rains, as well as provide the orphanage with additional supplies.

The ships will be docked in Phuket until Thursday.