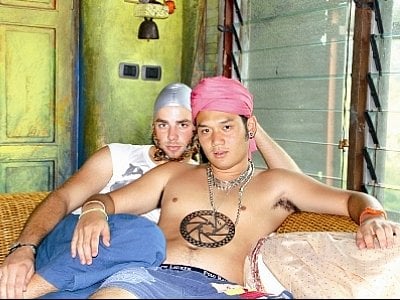 PHUKET: THE film and music festival being held this month at Brush on Kalim Beach may well be one of Phuket’s best kept secrets. The art restaurant is hosting screenings of films from Hollywood veterans and up-and-coming members of London’s art circles in addition to music performances from local talent, throughout August.

This is good news for those who enjoyed last year’s international film festival. A recent graduate of Phuket’s British International School (BIS), Zac Underwood, gathered a group of local friends and art students from London to make the type of film that has recently become an internet phenomenon. Sweded films, invented by French filmmaker Michel Gondry, are short parodies of popular movies made on a small budget by amateurs.

Gondry introduced this new film genre to YouTube when he made a sweded film based on his 2008 feature film, Be Kind Rewind. The movie was about a movie rental business where all the films were accidentally erased and the staff and their friends made brief copies acting out the roles. When asked what kind of films they were, they coined the now viral term “sweded”, on the basis that the movies were allegedly from Sweden. This remake trend has spread all over the world, becoming a cutting-edge cultural film phenomenon in the USA.

Zac graduated from the International Baccalaureate program at BIS in 2009. Last year he enrolled at Central St Martins College of Art and Design in Central London where he completed the foundation course which would allow him entry into the Bachelor of Arts program.

“It was a remarkable time meeting and working with young artists from all over the world. I had been painting here in Phuket and working with two-dimensional media, but when I got to London my view of the art world expanded,” Zac said.

During Zac’s time at Central St Martin’s, he took breaks and explored galleries in England, Sweden and Portugal. It was also during this time when he was introduced to the world of film.

“I discovered Michel Gondry who made Eternal Sunshine of the Spotless Mind, and some very exciting music videos. His body of work is very quirky and crafted. When I discovered his sweded films, I became intrigued about making one myself,” he said.

Zac returned to Phuket with some fellow London art students and after seeing Hangover 2, they decided to make their own short sweded version called Still Hungover.

“The beauty of a sweded film is that it can be made with unsophisticated technology and a modest budget. You can even make a sweded film on a good cellphone. We had a Canon digital camera and 2,000 baht which allowed us to make 90 minutes of film which we will need to edit down to 90 seconds,” he added.

Still Hungover was made in various locations around Phuket including the night market, the Underwood factory on the Bypass Road, and in an elevator at Big C.

Zac presented his film as part of the movie month at Brush, which included in the program at the launch party of Jim Newport’s new CD Wanted Man, which he performed with the Colin Hill band on August 13. Jim is an Emmy-nominated production designer of both film and television. In a career spanning 40 years, he set the look for films such as Bangkok Dangerous, Brokedown Palace and for some TV series such as The Shield and Lost. He presented five of his feature films at Brush from August 8 to 14.

Another screening will be the premier of A Song of Freedom, a film made by Hollywood veteran Ed Vaughn who has made Phuket his home for the past few years. Ed worked in Hollywood for 25 years, primarily on television productions. He trained at Universal Studios and is a member of the Director’s Guild of America. With a locally written screenplay and actors including some Chalong policemen, A Song of Freedom captures scenes of local life.

“Ed has made a beautiful movie. The photography alone lures the viewer into the story and challenges them with the sometimes harsh reality of local life,” said Jim Newport.

A Song of Freedom premiered August 15 and will run on the 22nd during the movie month fest at Brush.

Phuket’s Tin man with a heart of gold