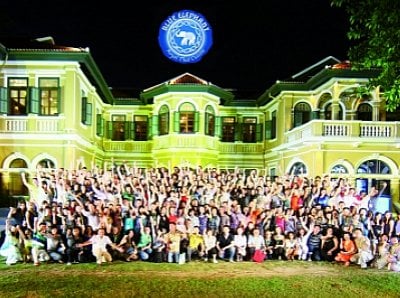 PHUKET: Starwood Hotels and Resorts Worldwide’s top salespeople were on Phuket earlier this month as part of the organizationn’s “Dazzling Thailand 2011” incentive trip.

Accompanied by their partners, the hot-shot salespeople arrived on Phuket on May 3, and bedded down for their first night at The Westin Siray Bay Resort & Spa Phuket.

The next day, the group enjoyed a range of activities around island – from tearing around on ATVs to relaxing on Phuket’s beaches.

But it was on May 4 that the group were really treated to a magical Phuket experience. They headed to the Blue Elephant restaurant in Phuket Town.

There, the group took part in the Japan Charity Dinner, raising money for survivors of the massive earthquake and ensuing tsunami which struck the country in March.

The Starwood Incentive trip was originally set down for Japan, but was moved to Phuket at the last minute after the quake struck.

Greg Findlay, general manager at The Westin Siray Bay, said the trip was not only good for the sales personnel, but also for the local Phuket economy.

“The tour group spent a lot of money around the island on their trip. These are salespeople who are keen to drive the local economy in the destinations they promote,” said Mr Findlay.