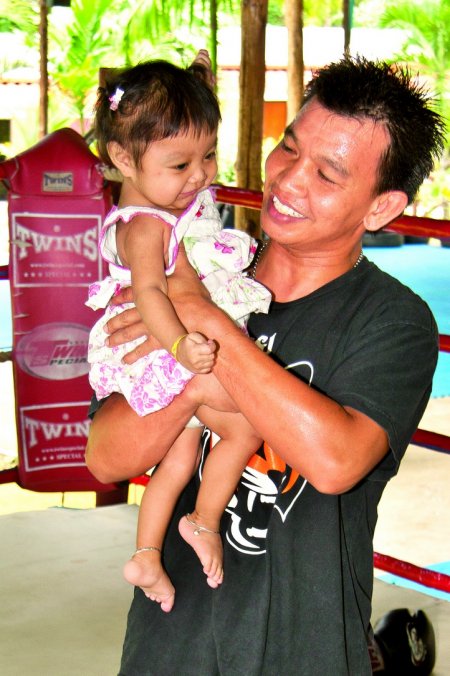 PHUKET: Tuptim is happy in the arms of her doting father Rattanachai “Kru Nai” as the Gazette arrives at Tiger Muay Thai in Chalong, where Kru Nai works as a trainer. A throng of beaming family friends faun over little Tuptim, eager to learn of her welfare.

The eyes of Tuptim’s mother Soisuda “Nit” Pile are trained on her daughter, monitoring her closely in the way only a mother does and wary of her fragile child in the midst of an adoring mob.

Will Elliot, manager of Tiger Muay Thai, is there too. Over the past year he has played a major role in helping the family get the treatment needed to save Tuptim’s life.

Nit recalls the day, in December last year, when doctors told the family that seven-month-old Tuptim needed a liver transplant to secure any hope of survival.

“Tuptim was taking medication for several months after her condition was diagnosed, but doctors at Ramathibodi Hospital in Bangkok said this was a temporary measure and an operation was needed quickly,” Nit said.

“Pleas for help were published in the Gazette and other media. A benefactor came forward and offered to pay for the surgery. We were so grateful, but unfortunately he couldn’t provide the money.

We’re not angry at this, if anything we appreciate the fact that he put the fund-raising in motion,” she said.

Will, who is a close friend, remembers the turn of events shortly after that initial financial letdown.

“Grainne Farrell and Jackie Singer offered her support, doors were knocked on and many articles were published around the world. Tuptim’s story was even aired on CNN. A PayPal account was set up to receive donations and it was being hit every 10 minutes,” Will said.

“A guy posted a rant on the Facebook page of Dana White (owner of the Ultimate Fighting Championship franchise) to the extent that Dana should not only get involved with fund-raising, but should pay for the operation in full,” Will added.

“Surprisingly, a few days later Dana’s assistant posted that he would take care of the matter. Sure enough, 10 days later the full amount was paid to Dr Sumate Teeraratkul, the specialist responsible for the operation,” Will said.

With financial worries out of the way, the next, more daunting step for the family was the impending surgery.

On January 19, two operations were performed simultaneously to transplant a section of Nit’s liver into Tuptim. A second operation took place to transplant veins from Nit’s leg to Tuptim, whose own veins were too small to support circulation to her new liver.

Nit’s surgery lasted four hours. At the time, Tuptim was eight months old. Her operation lasted for nearly 14 hours, a deeply harrowing and nail-biting period for family and friends alike.

As the Gazette listens to Nit recount her story about the surgery, husband Kru Nai clutches Tuptim closer to his chest, pressing his cheek to her head. He reaches tenderly for his wife, placing his free hand on her knee and gives a comforting squeeze.

Nit carries on with her story.

“When I woke after the operation, I immediately asked about my daughter. I had made it clear that my life was not important. As long as Tuptim had a chance of living I wanted the surgeons to keep going, to take all my organs if necessary,” she told the Gazette.

To her relief, doctors told her both operations had been successful, but Tuptim’s condition would have to be monitored closely to see if her body would accept the new liver.

Over the next three months, Tuptim’s recovery suffered many setbacks. The most serious was a lung infection, which doctors said most likely set in as a result of medication used to suppress her immune system and reduce the risk of organ rejection. Unfortunately the drug also opens the door to infections normally fended off by a healthy body.

“Apart from the 23 types of medication she must take for the rest of her life, she was also prescribed medicine to fight the lung infection. This cost 10,000 baht per day and had to be taken for a month,” Nit said.

The added expense put more strain on the family.

Kru Nai sold almost all of his worldly possessions, as did other family members to help with the mounting medical costs.

And another good Samaritan, Antonio of Hollywood Nightclub in Patong, came forward to help.

For three long months after her surgery, Tuptim was kept in the ICU in Bangkok. For this entire period, visiting was kept to a minimum by doctors concerned about Tuptim’s vulnerability to infection. While Nit stayed with Tuptim in hospital her father’s visits were restricted.

The period of separation was obviously tough on Kru Nai, who lovingly cradles Tuptim in his arms throughout the Gazette‘s time with the family.

Looking to the future, the prognosis is good for Tuptim. Despite the prospect of having to take medication for the rest of her life – more for infections than anything else – Tuptim will likely be able to live a relatively normal life.

And reassuringly, at such a young age, she will bear no mental scars from her tumultuous first year, only scars on her skin.