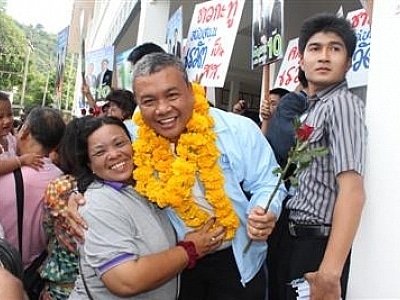 PHUKET: Anchalee Vanich Thepabutr and Raywat Areerob arrived at Provincial Hall at 8:30am today to register as the Democrat Party candidates in the upcoming general election.

After registering with Phuket Election Commission (PEC) officials, Mrs Anchalee and Mr Raywat thanked the large crowd of supporters awaiting them downstairs before handing out campaign material to government officials at Provincial Hall.

By 10am both candidates and supporters left Provincial Hall to continue campaigning elsewhere.

So far five candidates have registered to contest the election.

Jirayus Songyos of the Bhumjaithai Party, and Wisit Jai-arj and Saman Kebsap of the Pheu Thai Party, registered their candidacies yesterday.

Voters can expect much of the campaigning to involve the promotion of numbers representing the ballot numbers of the various parties in the party list election.

Mrs Anchalee and Mr Raywat are campaigning with the number “10”, representing the Democrat Party, while Mr Jirayus is promoting ballot number “16” for the Bhumjaithai Party.

Mr Wisit and Mr Saman have the luck of campaigning under the number “1”, which was drawn by the the Pheu Thai Party.

The election is scheduled to take place on July 3.

Thai stars to clash with Liverpool Legends at Thanyapura Phuket