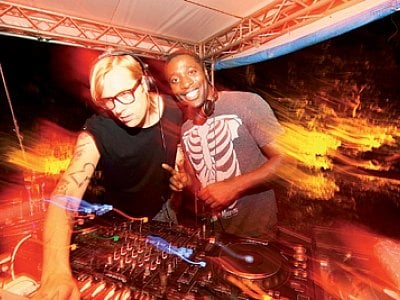 PHUKET: Looking back at the Sri Panwa party that everyone’s been talking about, and what music fans had to say.

The DJ line-up at Sri Panwa’s recent gig (September 28) had music fans buzzing with excitement weeks before the event.

Hundreds of locals, expats and tourists shared the dance floor, the balconies and the bars at the five-star resort’s Baba pool club for an unprecedented collection of big name DJs at the long-named Sweet, Sexy & Spicy Singapore F1 Party.

Despite British trip-hop duo Massive Attack flying out from Phuket the morning before the party due to scheduling problems, the line-up was still peppered with house music heavyweights.

Kele Okereke, the lead singer of Brit-band Bloc Party, was the opening act on the decks, followed by DJ Alex from Tokyo, Peter Kruder (one half of Kruder and Dorfmeister), DJ Vincenzo, DJ Gregory and Lovebirds.

In the weeks leading up to the Sri Panwa party, Facebook, Thai Visa and other blogs and social media were bombarded with posts from Phuket music fans eager to learn more about this event and, most importantly, how to get a ticket.

There was some skepticism. A handful of bloggers thought it would be impossible to get the line-up advertised to play. And indeed, Massive Attack’s last-minute exodus from the party raised eyebrows from some fans, but most remained undeterred in their plans for a jaunt down south. And they were rewarded for their efforts.

“First and foremost, I want to apologize to everyone in Phuket who was looking forward to seeing Massive Attack play. I was too,” said Sri Panwa’s Food & Beverage Director Jared O’ Brien.

“They were on the island staying at our resort, but over breakfast on Tuesday told us they had to urgently fly back to the United Kingdom,” he said.

“It was still a massive bonus that they flew to Phuket. Now they have seen a bit of what the island has to offer and hopefully they will be back to play soon.”

“But even without Massive Attack, to get DJs of this quality to Phuket is huge,” he added.

British writer and teacher Andrew Scott, 31, was among the masses on the night.

He told the Phuket Gazette that the event was a positive step forward for live music.

“For a resort like this to open its doors to the public and host DJs like this, it can only be seen as a positive thing.”

“More venues, especially resorts, should be hosting music nights like this. It’s obviously what people want… look around,” he said.

Korean Tourist Terry Park, 25, had only been on the island for a few days when she heard about the event.

Although the genre wasn’t her usual first choice, she said the hype surrounding the event made her want to come.

“This is my first time in Phuket and I am just lucky that this is on while I am here. We are going to have some serious fun,” she said.

Canadian Managing Director of Wave Entertainment Phuket, Jamie O’ Rourke, 31, said that while he was upset Massive Attack didn’t play, he still wouldn’t have missed the party with the line-up on offer.

“It’s a novelty. Although there was a cancellation, I think those kind of things have to be expected.

“When you reach for the stars, you’re not always going to get there, but I think it’s admirable that a resort in Phuket has pulled this off,” he said.

Phuket Comedy: A funny thing happened on the way to Patong

Phuket Gardening – Between a rock and a hard place