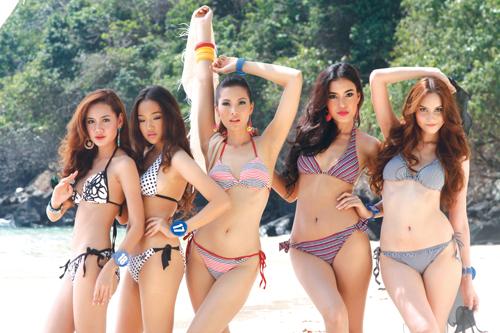 Kasemkij Hotels, which owns Cape Panwa, released a statement saying it was an honor to host the event and its activities that are designed to promote philanthropic endeavors, tourism and culture in line with this year’s slogan, “true ASEAN beauty on the global stage”.

The contestants wowed onlookers when they took part in a swimsuit photo shoot on the beach in front of the Cape Panwa Hotel on the second day of their visit.

Among the 20 beauties is one Phuket native: Nathasinee Wichaidit, 20, from Koh Kaew.

“This year, the 20 finalists stayed with us in order to prepare for the final competition. And, as Phuket is such a splendid location, both naturally and culturally, I believe each contestant was very impressed and left with many good memories and experiences.

“The Miss Thailand World contest is a very popular event, followed by millions of television viewers across the country. The presence of the contestants here in Phuket will give local tourism an extra boost, even though our southern island city is well known among Thai and foreign tourists. Additionally, The Absolute Suite, one of the most luxurious penthouse suites in Phuket, provided the perfect setting for the contestant interviews. These will be aired on TV CH3 later in March as part of the Miss Thailand World Variety Program, which will hopefully attract more visitors to Phuket during the upcoming Songkran festive season.”

Cape Panwa Hotel, Phuket General Manager Philipp S Frickhinger said that he was certain the visiting contestants were impressed with the hotel and its facilities. “Everything was specially prepared for the Miss Thailand World 2013 finalists, including the famous swimsuit photo shoot which was shot on the hotel’s beautiful white, sandy beach,” he said.

“Over the three days at Cape Panwa Hotel, the contestants learned everything they needed to know to compete in the pageant and helped to promote Phuket tourism and take part in philanthropic activities,” Philipp concluded.

The group departed Phuket recently and will travel to Myanmar on Monday to promote Thai culture by joining a fashion show themed “beauty still has value… beauty to the sight of Asean”.

The contestants will return to Bangkok for the final round of the Miss Thailand World pageant to be held at the Bangkok Convention Center at the Centara Grand hotel on April 9.

The pageant finale will be broadcast nationwide on Thai TV Channel 3 on April 10, starting at 10:30pm.

Phuket Lifestyle: PIMEX is better than ever