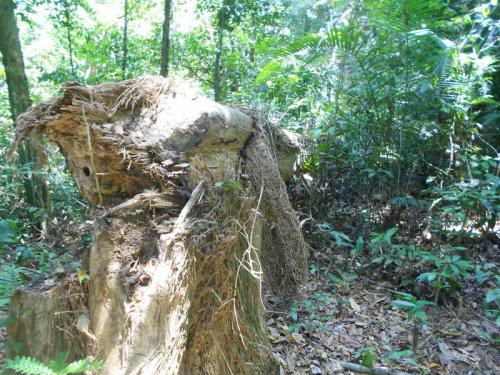 PHUKET: Officers at the Khao Phra Thaew wildlife sanctuary in Thalang have vowed to step up their efforts to keep bandits from cutting down valuable eaglewood trees in the park.

Eaglewood trees are wanted for the aromatic resin they produce, which is also known as agarwood. The resin is used in making incense and perfumes.

The news follows Phuket Governor Maitri Inthusut’s Thursday summons of Awat Nitikul, chief of the Environmental Conservation Unit based at the wildlife reserve, to Phuket Provincial Hall to explain what action had been taken in response to reports of tree cutters operating in the area.

Local residents had filed a complaint to the Phuket Press Club about wood cutters felling eaglewood trees in the park.

“The villagers thought the trees were cut down only recently, but it actually happened on January 27, when our night patrol found three men trying to steal them,” Mr Awat explained to the Phuket Gazette.

The thieves cut down two eaglewood trees. In 10 other trees, they made incisions about 30-40cm into the trunk to check whether they were producing any of the resin required to make the fragrance.

“The men ran away when they saw us. We chased after them, but it was difficult to catch them because it was dark, so the three escaped,” Mr Awat said.

“We contacted park officers in nearby provinces to keep a lookout for the them,” he added.

The men were finally arrested in the Khao Pra – Bang Kram Wildlife Sanctuary in Krabi while trying to cut eaglewood trees there.

Although his resources are already stretched, Mr Awat said he would step up the number of officers on patrol in the park.

“Khao Phra Thaew covers an area of about 10,000 rai and has more than 100 eaglewood trees. Almost every day, my team and I patrol the area. However, some wood cutters still try to enter the park to cut down the eaglewoods,” Mr Awat explained.

“We currently have only one patrol team. We have to set up more teams to make our work more efficient,” he added.