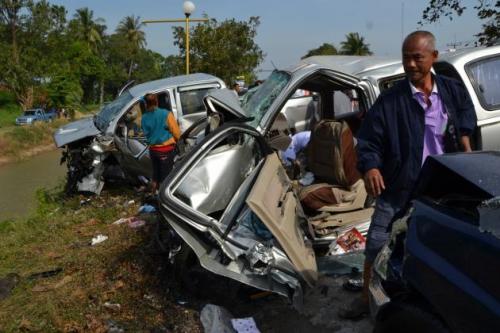 PHUKET: A blaze raged through a refugee camp in the northern Mae Hong Son province on Friday evening, leaving at least 30 people dead and dozens others injured.

About 100 houses in the Baan Mae Surin refugee camp, located in Khun Yuam district, were destroyed in the fire. There are more than 3,500 residents in the camp, most of them Karen refugees from Myanmar. The fire started at about 4 pm and it took fire-fighters more than two hours to control the blaze. There were conflicting reports involving the cause of the fire. Some sources said it was caused by a forest fire while others blamed careless cooking by some camp residents.

Yingluck plays down replacement fears
The Nation / Phuket Gazette
PHUKET: In In response to speculation that her older sister might replace her, Prime Minister Yingluck Shinawatra yesterday only frowned, saying she was far too busy to pay attention to such rumours.

“It is not that easy to replace a prime minister, because it is the people’s mandate. I have been entrusted to do this job and am backed by a majority vote under democratic rule,” she said.

The prime minister is currently on an official visit to New Zealand.

Yingluck said people could and would render their judgement on her leadership, adding that though she is not that good at promoting herself, her performance will speak for itself.

“I may fumble with my words when making a speech, but please don’t try to fault me, because I speak from my heart,” she said.

The ruling-Pheu Thai Party’s executive committee later decided to field Yaowapa Wongsawat in a by-election scheduled for next month. Opposition politicians then started saying that Yaowapa might replace Yingluck as government head, but Thaksin rejected this speculation as groundless.

The Constitution requires the prime minister to be an MP.

The inconsistencies in her asset declaration with the National Anti-Corruption Commission and her government’s decision to issue a new passport for Thaksin are the two issues that have put Yingluck in a hot seat – leading to speculation that her sister is being groomed to take over.

However, a survey in Bangkok and adjacent provinces found that most people don’t believe Yaowapa will replace Yingluck.

About two in five of the 1,123 respondents said they wanted a limited change in the Cabinet line-up, while three in 10 supported a major reshuffle.

The survey was conducted and released yesterday by Bangkok University.

PHUKET: The Thai bourse plunged steeply yesterday due to the effects of the Cypriot bail-out and banking crisis, as well as domestic hiccups, but managed to show signs of resilience with daily turnover swelling to Bt101.36 billion – the highest in its 39-year history.

It easily surpassed the previous record of Bt81.27 billion, registered on January 10.

“Looking forward, we remain optimistic of the long-term prospects for the Thai market,” said Chanpen Sirithanarattanakul, head of research at DBS Vickers Securities (Thailand). “At current levels, the market is trading at 2013 PE [price-earnings ratio] of 13.6 times, which is still attractive given strong projected earnings growth of 17.4 per cent for this year.”

DBS expects the index to rise to 1,688 points in the next 12 months. Despite the 3.30-per-cent loss yesterday, the target remains intact.

Tisco Securities dubbed yesterday’s slump part of a correction following the sharp spike in the index in recent weeks. It foresees the correction lasting three to four weeks, until after the Songkran Festival, pending clarification of the Bt2-trillion infrastructure borrowing bill and the amnesty bill. The borrowing bill is slated for House debate on March 28-29.

SET president Charamporn Jotikasthira said at a hastily called press conference yesterday that the market fall serves as a reminder to all investors that profits and losses are intertwined when it comes to stock investment. “The volume at Bt100 billion does not reflect speculation. It reflects the timing that some investors want to unload shares, particularly shares of highly-speculated stocks. Overall, the index was down by only 3 per cent, but highly-speculated stocks were down by 9 per cent,” Charamporn said. In particular, he is concerned about individual investors.

“It’s just a market correction,” echoed Deputy Prime Minister and Finance Minister Kittiratt Na-Ranong. “Profit taking can occur after sustained increases. It’s not something to panic about,” he said, pointing out that there has been no change in the country’s economic fundamentals.

The Thai bourse, experiencing its biggest weekly slump since the global financial crisis of 2008, joined some regional markets in showing losses. European markets also opened with losses yesterday as concerns about Cyprus and the euro zone escalated.

While foreign investors appear to have become more risk-averse, Thailand remains attractive to foreign investors. According to Bloomberg and Tisco Research, this month through Thursday, foreign inflows to the stock market reached US$167 million (Bt4.8 billion). They remained net-buyers yesterday, but with a small net-buy position of Bt73.55 million.

Aside from the Cypriot crisis, domestically, unfavourable factors prevailed. Investors were concerned that the bourse may increase margin requirements on equity trading. The exchange may increase the level of collateral that customers must maintain in their trading accounts to 20 per cent of their credit line, from 15 per cent. There were also fears that the Bank of Thailand will launch capital control measures to stem the baht’s appreciation, which could encourage outflows from the country. The baht yesterday weakened slightly against the US dollar to 29.30 in the afternoon, after touching 29.08 on Wednesday, the strongest level since a devaluation sparked the Asian financial crisis in 1997.

“I can assure that the market slump has nothing to do with investor fears that the central bank would implement capital controls,” said Bank of Thailand Governor Prasarn Trairatvorakul. “It has nothing to do with capital inflows, as most of the inflows are channelled to the bond market. In the past two months, foreign capital inflow to the stock market has been low. The sharp fall followed sharp spikes, which led to warnings against investment in some stocks.”