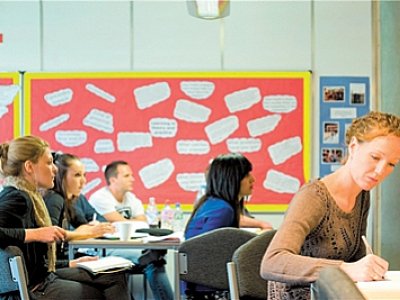 PHUKET: The requirements for getting hired as a foreign teacher in Thailand are incredibly low. Degrees and TEFL certificates are bandied about but not truly required in many schools.

With Thailand’s low standards come low salaries, lower expectations and the profession’s ugly stereotype: the backpacker teacher. Typically transient, the backpacker uses his or her classroom as a means to a paycheck before picking up and disappearing into the wind.

But before we start painting Phuket’s pedagogical picture with a broader brush, it should be said that there are dedicated foreigners looking to become better teachers and one qualification from the University of Nottingham is becoming a popular option: the PGCEi.

Similar to a Post Graduate Certificate in Education (PGCE), the “i” stands for “international”. According to Nottingham’s prospectus, the course is, “a part-time, distance learning programme of professional enrichment for educators working in countries other than the UK.”

That last bit is important because unlike a PGCE, the PGCEi cannot be used to gain Britain’s qualified teacher status (QTS).

The PGCEi is a relatively new course, as Dr Paul Thompson, Director of Nottingham’s Masters Studies explained. “The total number of graduates since the course was launched in February 2008 is something like 600. We are recruiting around 230 students a year,” he says.

The course is open to anyone with a bachelor’s degree who has access to a classroom, a computer and the internet. Those without degrees are also considered but applicants are required to produce an extended personal statement which details their suitability for postgraduate study.

Priced at GBP 2,900 (approx 138,400 baht), the course begins with a three-day induction session at one of Nottingham’s half-dozen venues worldwide. Phuket’s participants typically attend in Bangkok or Kuala Lumpur.

PGCEi Tutor Dr. Lucy Cooker told the Gazette, “As far as I’m aware, the Bangkok cohort was the largest last October when we had 66 people enroll.”

The course is divided into four modules. Each is worth 15 credits and assessed through a 3,000-word essay. Qualifying credits can be applied toward earning a post-graduate diploma (120 credits), a master’s degree (180 credits) and even a doctorate in Education.

“No one has failed. We only accept people if we think they are able to succeed. It wouldn’t be fair to take their money if we felt otherwise,” said Cooker.

Having recently earned her PGCEi, Darasamuth teacher Jules Devitto reported, “The course was quite flexible in that I could take it in a direction that I was interested in when writing my assignments.

It was very theory-based so it didn’t help me in practical ways such as lesson planning or preparing materials. But it did help me to consider a variety of ways in which my students learn, and to also consider techniques for behavior management and assessing students’ work.”

Summarizing why the PGCEi is becoming so popular, Devitto stated, “Moving back to the UK for a year wasn’t really a financial option for me. The PGCEi seemed like the perfect opportunity to get my PGCE whilst still working and teaching in Thailand. I am now going on to work at an international school in Shanghai in August, and I wouldn’t have been qualified to do this without the PGCEi.”

The PGCEi is not only for the British. American Ryan Meinhart is teaching at Konjonkiet and is currently studying his second module.

“My school offered to subsidize my course but I would have had to commit to them for two years so I declined. Once I finish, my school will increase my monthly salary by 6,000 baht,” stated Meinhart.

In addition to the financial benefits, it’s quite possible that the PGCEi and its subsequent Diploma in Education will exempt teachers who lack Education degrees from having to take the Teachers’ Council of Thailand’s Professional Knowledge tests. However, at the time of publication no TCT official was able to confirm the accuracy of this.

Deserved or not, the poor reputation of Phuket’s teachers might just improve upon the backs of these professionally minded educators, rather than continually suffering from the antics of the teachers’ backpacking “colleagues”.

Start your engines, the Phuket Invitational Car Rally is ready for road