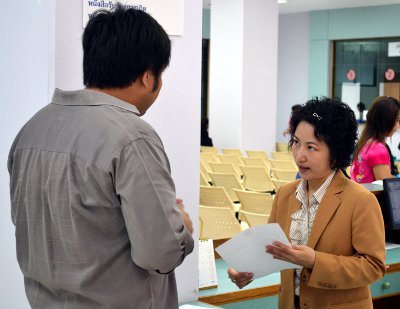 PHUKET: The Phuket Provincial Administration Organization (OrBorJor) Hospital is accepting applications from workers who want the new hospital to be their primary healthcare provider under the Social Security insurance scheme.

The OrBorJor hospital, located on the east side of Phuket Town, has been actively courting new patients since its opening in May last year.

Darawan Jinda, who heads the hospital’s Social Security Office, said the 129-bed hospital has the capacity to sign up 35,000 transfer patients registered under the government-run social security scheme.

As of today, “fewer than 10,000” had transferred from other hospitals.

The deadline for existing policy-holders to apply ends March 31, though people entering the system for the first time can sign up with the hospital any time of the year, she said.

Hospital staff can also conduct outreach visits to sign up patients at companies with 10 or more workers interested in transferring to the new hospital, she said.

Previously, there were only four hospitals on the island providing care under the Social Security scheme: the government-run Vachira Phuket, Patong and Thalang hospitals, as well as the non-profit Mission Phuket Hospital.

Mission Phuket CEO Atikom Sriratanaprapat told the Phuket Gazette that thus far there had been virtually no loss of social security patients to the new OrBorJor hospital.

Mission Phuket currently has over 50,000 patients registered under the program, and a waiting list of more wanting to sign up, he said.

A staff member at Vachira Phuket’s Social Security Office would not comment on whether the new hospital was drawing away patients from that facility.

The office would consider releasing information to the press only following receipt of a formal, written request, she said.

Phuket gears up for PIMEX 2012