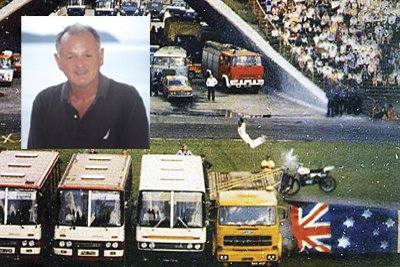 PHUKET: Sometimes Phuket is compared to the Wild West, and, although a bit dramatic, it can be true. You never know what can happen here, or who you might find doing it.

The island has a tendency to draw extraordinary individuals. Quiet neighborhoods overlooking the ocean that house the secretly rich and famous. You might meet the person who invented the “winged suit”, the sailor who set a record for circumnavigating the globe, or a Bollywood film star looking for a secluded beach.

One such character has been living in Phuket for many years, though you may not have had occasion to meet him – yet. He was a personal friend of Evel Knievel, and has been performing death-defying stunts for several decades. The real deal.

Now a man of more advanced years, he says he’s not ready to give up performing, and wants to make a dramatic comeback to the business of being a daredevil. Best of all, he wants to do it right here on our sunny paradise island.

What stunt will he perform?

All things in their turn, but first, the life and times of Phuket’s-own professional daredevil.

Ian Jamieson was born in Adelaide, Australia. He was a sickly child often told he couldn’t do a thing, only to do it anyway.

Ian says he never really wanted to be a stuntman: “Originally, I wanted to be a film producer but stunts were the only way I could think of to break into the film industry.”

Ian and three close friends toured Poland in 1986 performing stunts to packed arenas. He says that experience gave him a unique insight into the “Iron Curtain” of the former Soviet Bloc.

In Warsaw, while performing a high-fall from thirty meters, blindfolded, into explosives, he narrowly missed his landing pad and hit the ground in front of 83,000 people who looked on in terror.

“I had many signals, red flags that I brushed aside,” says Ian, “I should have known better.”

After suffering a cracked sternum from that incident, Jamieson pulled through and performed the same trick three weeks later to the same arena, only this time with thunderous applause from the crowd.

After a couple of near-misses while touring in Poland, he decided to stop performing for a while and move on to something different.

In 1991 he came to Phuket to set up ‘Tarzan’s Bungy Jump’ in Kathu and has been here ever since.

Now, at the age of sixty, he isn’t in the shape he was as a young man. Does he have a death wish?

“Phuket is still the Wild West – so many people come here to escape or start a second life,” says Jamieson, adding he’s no exception.

“You hear many stories and you don’t know if they’re true or not. Phuket just attracts unusual people from around the world.”

“But, I’m trying to be sensible,” he answers before I can ask the obvious question; noting that people often ask why he would risk his life so foolishly. “A helicopter is less distance [than I’m used to jumping] but [it] still looks dangerous to the audience.”

Jamieson has been brainstorming with several event managers on the island. He wants to figure out what is coming up in the high season that his performance could be included in. The stunt would require a crowd large enough to sustain the spectacle (several thousand at least), the blessing of the government and a helicopter.

“There’re a lot of powerful people in Phuket now, who, when I started, were starting,” says Ian, “And I think there could be a lot of interest in me performing this stunt and people putting up money or helping knock down hurdles so it can happen.”

Jamieson says he’s made Phuket his adopted home and wants to give back by creating a performance unlike anything else in the Kingdom.

He reveals that he would crash his motorcycle into a wall, catapulting him over the blades of a military helicopter.

Details will be in the Phuket Gazette as they become available and you can see Jamieson this week on the Phuket Today show (Channel 9) and UBC/True Visions (Channel 99).

Land of smiles: An interview with Higgs Boson