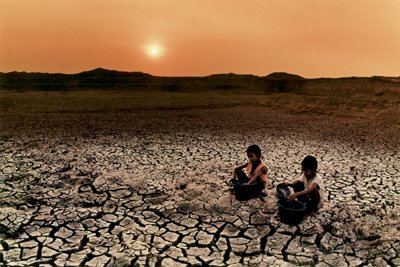 PHUKET: World Environmental Day, which was on June 5, has a special meaning for Phuket-based photographer Chusak Uthaipanumas. Twenty years ago, on this day, he received an accolade at the quadrennial photo contest on the environment organized by United Nations Environmental Programme (UNEP).

The photographer traveled to Rio de Janeiro in Brazil, to attend the UNEP award ceremony. It was an event witnessed by many world dignitaries, the proudest moment of his working life.

Selected from more than a thousand international participants, Chusak’s work entitled “Sorrowful Lifestyle”, a moody and poignant depiction of two children sitting on the edge of a vast expanse of parched, cracked earth, won second prize in the “professional” category.

Chusak, now 53 years old, was no stranger to acclaim. Having worked as a photographer since the 1980s, he has amassed over five hundred national and international prizes. What marks the UNEP recognition out was the fact that it acknowledged the drive and ideals behind the body of his work.

Chusak’s style of working is to take many photographs of one place, a landscape for example, over a period of weeks, months and even years, covering the changes of the seasons, climate and environment, whether these changes are natural or man-made. His photo-documentary style tells stories of seasons, terrain and communities.

The award-winning picture, for example, was of a dry and cakey swamp, taken in Korat, in the northeast of Thailand, where the extreme heat of the summer usually takes its toll on the farmers there. Chusak explained: ” When I was in Rio to receive the award, people came up to me and asked if Thailand could be that dry. They associated this extreme harshness with parts of Africa and my photo came as a surprise to them.”

He then proceeds to show me another picture of the same place, in the rainy season this time. It shows a large lake full of water, lotus plants in full bloom, and children frolicking joyfully. This picture won both the grand prize and the grand honorary prize at the Ballantine’s Photography Awards in England. He is the first person in the world to win both awards in the same year.

Chusak came to Phuket 25 years ago and says he was touched by the island’s pristine beauty and started to take many pictures of its scenery. He always took notes during the photo excursions to remind himself of any peculiarities he found in certain places – the angle of the sun, the times of the tides and any particular landmarks.

Chusak, who by now has become very familiar with the whole terrain, says he has witnessed many sad changes in Phuket’s landscape, mostly due to human ignorance.

The most famous landmark of Phuket, Laem Promthep, is a case in point. Arguably, the most photographed spot on the island, the picture of the alluring sunset with silhouettes of palm trees, figures prominently on many tourist brochures and other promotional material.

The palms, Chusak says, died over the year, and changed the whole vista. “I noticed the change in my negative spaces.” Concerned with the outlook of this iconic spot, the photographer took it upon himself to report this to the authorities in order to replace the dead trees with new ones.

“I don’t see why we can preserve the old town and not Laem Promthep. This place is the identity of the whole island and should be kept that way.”

He also says that he doesn’t agree with having shops there. Commerce, he says, creates its own set of problems. “Why do we always have to entice tourists to shop, anyway?”

Move over to another beach, the idyllic Rawai in southern of Phuket, home to Chao Lae or the Sea Gypsies of Phuket. Chusak has been taking photographs here since the 1980s when the Chao Lae children wore nothing and the women often went topless. His record of this community in the last decade, he says, was unique and might become important historical documentation.

Now the sea gypsies wear jeans and sport wrist-watches and the wood and thatch houses gave way to brick and mortar construction. Satellite dishes are now very much part of the landscape.

“I don’t blame the Chao Lae for wanting a better lifestyle. However, there must be a way to curb and manage the development in a way that still preserves their unique way of life. They are part of our society and as such we must all help them remain that way. To me this is so much better than just building a museum to house their heritage. Their livelihood is a living museum.”

In the light of the relentless changes that are happening all around us, Chusak will for now have to be content with doing what he does best – taking pictures to show the world that it’s changing too fast.