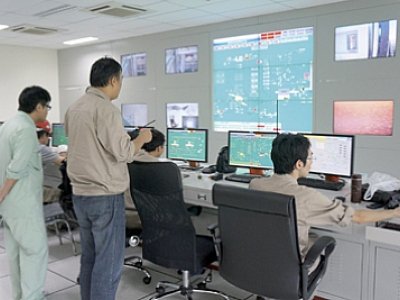 The incinerator, which was expected to be fully operational during May, encountered technical problems during its trial run and repairs needed to be carried out.

The timing was unfortunate. At the same time, the older number one incinerator also developed problems and had to be shut down ahead of schedule for maintenance.

Prachoom Suriya, chief of Phuket City Municipality Environment Office took time to explain the process at the incinerator to the Phuket Gazette.

“Garbage from all over Phuket is coming to this incinerator. We charge each municipality or Tambon 520 baht per ton to deal with their waste.

“The [new] incinerator can handle at least 700 tons of trash per day. However during the trial period we were burning only 300 tons per day. Currently, we receive 640 tons of garbage every day. That’s a nine per cent increase on last year’s tonnage,” explained Mr Prachoom.

Before the trash can be burnt, excess fluid needs to be drained off. This is done by storing the wet waste in the 7,000-ton-capacity storage unit. When dry, the incinerator can then process the waste at a rate of 700 tons per day. The storage unit is divided into 10 bays, each of which can hold up to 700 tons of waste. From there, the garbage is transferred to the incinerator on a rota basis, the driest trash being stored for the longest period.

“About 60 per cent of all garbage arriving at the facility consists of organic waste, such as food scraps, leaves and tree branches. Not much in the way of recyclable garbage comes in, as it has an economical value and is separated from the rest before it arrives,” he said.

In early May this year, local villagers and visitors to Saphan Hin Park filed complaints against the Phuket City Municipality Environment Office regarding noxious odor from the incinerator.

“The old incinerator was shut down on May 23. Since then, we’ve had to rely on the new incinerator burning only its 300 ton trial capacity until it became fully operational on June 5.”

To solve the immediate problem Phuket City Municipality Environment Office had to pick the best of some bad choices until the new incinerator could be brought online. They ended up reverting back to using the landfill site, which was already over-flowing.

“Since we had no properly functioning incinerators, we had to solve the problem by using the landfill. The smell was still really bad as the site had been full since March 14 of this year. Garbage arriving was just piled up at the landfill with no proper treatment,” said Mr Prachoom.

“Weather conditions were another factor we had to deal with. On rainy days, the smell was even worse. However, we solved the smell problem by pouring over 1,000 liters of effective microorganism liquid (EM) over the trash,” he added.

The landfill at the rear of the incinerator facility is where a vast amount of Phuket’s rubbish is now being stored. These enormous piles of trash will be processed once the incinerator is up and running.

“We are slowly, bit by bit, getting rid of the garbage over-spill, but there is a lot that needs to be burnt. Now that the new incinerator is fully operational, we hope we can get rid off it all soon,” said Mr Prachoom.

The new incinerator was designed to be able to burn all kinds of trash as there is no formal separation process before it arrives at the incinerator facility.

“The separation process has to be conducted at the source, but I know that Thai people are not in the habit of sorting their household trash at home,” lamented Mr Prachoom.

“Phuket people need to learn about garbage separation. We all need to take this more seriously. Previously, we ran a 10-million-baht campaign to highlight the issue, but people continued putting all their rubbish in one bag.”

“We used to have a trash type separation unit, but by the time the garbage arrived here, it was mixed and contaminated. That is why our new incinerator is designed to burn all types of trash. With the heat at 960 degrees centigrade everything will be burnt, nothing will be left, including chemicals that can damage the environment,” he said.

In order to solve the problem in the long-run, Phuket City Municipality Environment Office has planned to campaign for Phuket to be “greener”.

“We have already planned a campaign for trash separation. The Phuket Provincial Administration Organization (OrBorJor) will be in charge of the project, called ‘Green Route’,” said Mr Prachoom.

“The ‘Green Route’ project will involve sending out one truck to collect recyclable trash and a second for wet trash.”

“The OrBorJor has proposed the project and requested a budget in order to build a factory with the capability to convert trash into fertilizer or bio-gas,” he added.