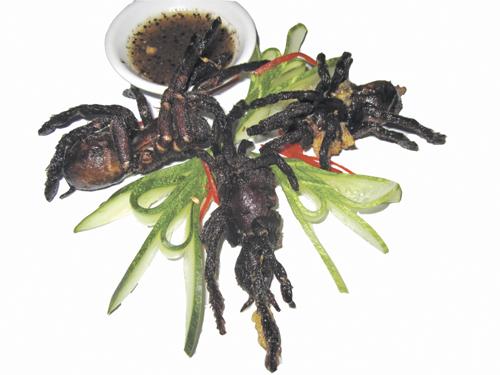 PHUKET: The holiday season is here and the Phuket geese are getting nervous. But tropical heat and looking good on the island’s beaches may require something a little lighter than all that turkey and Christmas pudding. As an alternative consider a Holiday Season dinner comprised of the local creepy-crawlies that many Phuketians love to eat.

The Locust Eaters
Insects are full of protein. A few of decades ago a large swarm of locusts blew clear across the Indian Ocean and started munching on Thai crops. Scientists recommended that the farmers start eating the locusts in turn.

Fair’s only fair, if an insect eats your dinner, the law of Karma almost mandates that you turn him into dinner in return thereby ensuring that what goes around comes around.

Thais have been enjoying locusts ever since. In Phuket you can buy a bag of tukataen – fried locusts with dipping sauce. In fact these days they’re considered a bit of a delicacy and are pricey.

When eating your locust, pull off the hind legs, which are rather prickly. The rest is nice and crunchy and goes well with a cold beer… in fact the more cold beer you drink, the better they taste.

As Smooth as Silk
The life cycle of the silk worm involves a couple of months incarnated as a feeding machine, in the form of a caterpillar, munching on Mulberry leaves. Once gorged, they spin a cocoon of silk around themselves and go into their pupa stage for a nice long sleep.

This is when you pounce.

Silk farmers dump the cocoons into boiling water and boil off the silk. This doesn’t bother the worms as they are undergoing the “big change” and inside are just basically biological soup.

After skimming off the silk, the farmers are left with the pupae which look rather like a grubby Nike running shoe, about a quarter of an inch long.

Stir fry them quickly and serve hot. The outside is slightly chewy, but the inside tastes like a fine egg yolk and makes an excellent appetizer.

Beetle Bailey
A lot of insects eaten in Phuket are fried. Simply throw your creepy crawlies into a saucepan with a little oil, chili and garlic and hold it over the heat, giving an occasional shake to ensure that they are evenly cooked. When the last one stops kicking, it’s time to eat.

This is a good way to eat meng kanoon, chunky little brown beetles that emerge at the beginning of the monsoon season every couple of years or so. Catching them is easy.

During the day they burrow into the ground, but at night they emerge to feast on foliage. Take a flashlight and shine it on bushes and you’ll see the beetles because their eyes reflect the light with a lovely golden glow.

Most will then make a beeline, or a ‘beetle line’, for the light and can be easily harvested. They take only a couple of minutes to fry, but pull off their wing casings before eating as these are hard and have rather sharp edges.

Termite Time
Swarming termites erupt during the rainy season from huge underground nests and come in a variety of sizes, with the prized specimens having a massive wingspan of up to two inches. To catch flying termites place a bowl of water under the light on your balcony.

Many of the termites, thinking that they have seen the moon, will dive straight into the water. The next morning separate the termites from their wings and you’ll end up with a very tasty meal. Fry ’em up and chow ’em down.

Ant-i Pasta?
If you want to eat ants with your pasta, try the abundant red ones found in Phuket. These deserve to be eaten, as they’re the blighters that fall from vegetation onto unwary passersby and try to bite a piece off their body to carry back to their nests.

You need to collect a lot of ants for a good feed, so go hunting for their nests. These are fairly easy to spot hanging off branches.

Approach the nest with a bucket of water, a stick and a sharp pair of scissors. Very carefully (unless you enjoy being bitten by ants) position the bucket below the nest and snip it away from the branch so that it lands into the water.

Quickly stir the water with the stick to break up the nest and drown the ants. Leave it for a while, as even drowning ants have a remarkable ability to bite! You’ll probably find lots of little white blobs mixed in with the ants. These are their eggs and are also highly edible.

The result will not be an ant-i-climax!

Everybody gets a leg
Tarantulas are mega-spiders that have a leg span of up to four inches and live in holes in the ground.
Experts can tease the spiders out of their holes and quickly grab them. They’re actually a lot less venomous than their scorpion cousins and have plenty of meat on them.

Scorpions have less meat and of course, an outer carapace, but once cooked
are harmless and so can be gulped down sting and all.

Mmmmm… munchy, crunchy and with plenty of roughage!

All joking aside, one of the great benefits of eating insects and arachnids, as some locals do in Phuket, is that they contain a very high concentration of protein.

If you can get your head around the aesthetics of their consumption, you are actually
dining on a very healthy food group indeed.

So as an alternative to all that turkey and Christmas pudding, consider giving the “Bugger’s Diet” a try during the this festive season.

Phuket Books: The Cambodian book of the dead