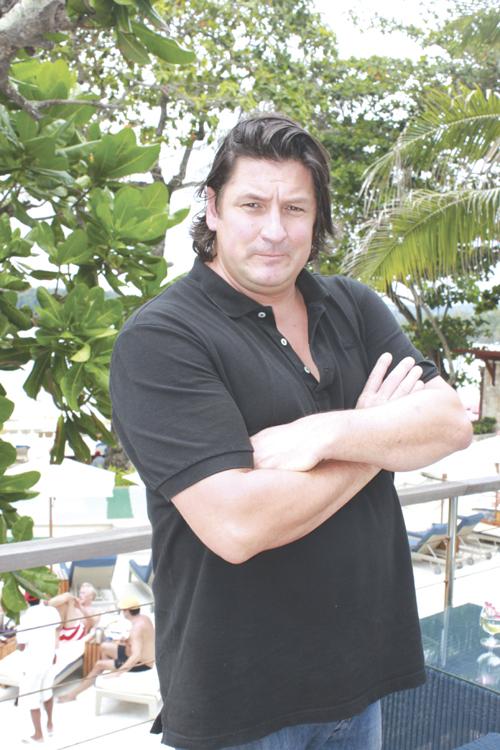 PHUKET: Anyone who has ever tempted fate by trying the ersatz vegetarian food at Phuket’s annual Vegetarian Festival will more than likely agree that it’s all deep fried; it’s not actually very good for you; and while it may look like a sausage or a chicken drum-stick, it actually tastes like soaked cardboard.

So when word got out that Marco Westmass, a renowned vegetarian chef from The Hague, was breezing into town and putting on some swank dinners at Boathouse and Trisara to showcase his justly famed dishes, the urge to try vegetarian fare that didn’t actually taste like the Phuket Gazette was irresistible.

And lo, there’s the great man himself, serving up some pretty meaty gin and tonics at RE KÁ TA’s upstairs bar on Kata Beach. The growing queue at the bar testifies to the fact that the evening’s punters would much prefer a good slug of gin to the bubbly prosciutto bottles standing forlorn to the side like so many rejected suitors.

A posse of wait staff circulate, distributing amuse bouches from Boathouse until another wave introduces us to Marco’s cuisine in the form of bitterball crispy Dutch shrimp and dried lupine sausage along with gin glasses of cherry tomato, parmesan, yoghurt and basil.

It’s all very tasty and the fact that this food is made from common-or-garden lupines is actually quite incredible. But it’s true, so onward we plunge with a tasty treat of potato, caviar, Nori seaweed, bread, amaranth and mache lettuce.

How far away can you get from deep-fried cardboard? A long way, we soon learn.

A notable taster is the watermelon ‘steak tartar’ which captures the taste, if not the texture, of steak with an uncanny resemblance.

And so we all sit down to a wonderfully decked out table in RE KÁ TA’s main dining area.

It’s all very jolly, with cool jazz tumbling out of the top-of-the-line speakers, the odd thump and hiss of the incoming waves and the relentless whine of an American lady recounting her visit to the Holy Land to an unsuspecting Norwegian couple.

Scallops, lard anchovies, lime, oyster and caviar are next and the salty tang of the dish leaps out and slaps diners hard in the mouth – it’s not dissimilar to a mouthful of seawater, albeit in a pleasant way.

A tangy German Riesling washes it down well.

Langoustine, yoghurt, parmesan, cabbage, rhubarb and lemongrass are next prompting the tempting question:

Does Chef Marco Westmass produce these dishes, then name them or does he set out to create a laugoustine dish until he gets the combination right?

But there’s no such doubt about the excellent wine parings of the evening – each a light and tasty accompaniment to these creations.

Next up is a sole, lobster, baby carrot, dashi and lemongrass paired with a Vacheron 2010.

Good stuff, and as I wander off to chat with the resident DJ a sirloin ‘dry aged’ along with Enyingi mushroom, eggplant and Shanghai bok choy is waiting for me when I return.

This is incredible – such authenticity, such talent – it’s just like the real thing: That’s because it is – a genuine steak to round the mains off. With hindsight I really should have known, but so much magic was going down you could have told me that it was also made of lupines and I would have believed you.