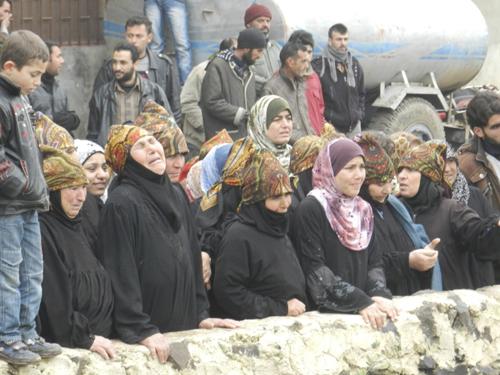 PHUKET: More than 60 people are believed to have been killed yesterday when a government airstrike hit a bakery in Syria’s central Hamas province where a crowd was queuing for bread, activists and witnesses said. It would make it one of the worst airstrikes in the ongoing civil war.

The airstrike happened at the front of a bakery in the town of Halfaya, located about 20 kilometers (12 miles) northwest of Hama, the capital of the province which carries the same name. Witnesses said dozens of people were waiting in line for bread when a government airstrike struck.

“More than 60 civilians were killed by the regime’s aerial bombardment on the town of Helfaya. Fourteen of those were torn to pieces and badly disfigured,” a spokesperson for the Britain-based activist group Syrian Observatory for Human Rights said. The group said dozens more were injured, including 50 people who were in a critical condition.

Footage uploaded to the video-sharing website YouTube showed a crater directly in front of a heavily damaged building, although it was not possible to verify the authenticity of the videos. They showed injured people and an unknown number of bodies, some of them in puddles of blood or underneath blocks of concrete.

If the death toll is confirmed to be more than 60, it would make Sunday’s airstrike one of the worst of its kind since the start of the uprising against President al-Assad in March 2011. Syrian state television provided few details about the incident but blamed an “armed terrorist group”, a term frequently used by the government to refer to its opponents.

The United Nations estimates that more than 30,000 people, many of them civilians, have been killed and more than 1.2 million others have been displaced since the start of the uprising last year which was met with a military crackdown. The opposition believes the number of deaths has already surpassed 44,000.