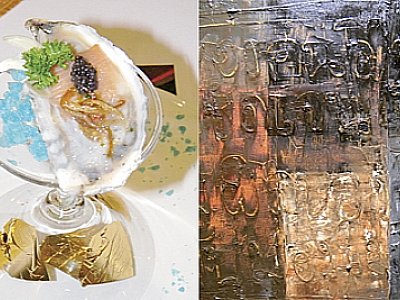 PHUKET: Michael Earle is an architect and local magazine publisher with a mission to expose and support Phuket’s local artists.

“I moved to the island three years ago after working as an architect in Spain for many years. I immediately noticed a great number of interesting art galleries operated mainly by local Thai artists in Phuket Town. They were not getting much exposure or recognition for their work from the international community.”

“Our mission is to expose good design in all forms, whether it is industrial, architecture or interiors, from every region in the world. There’s an emphasis on eco-friendly and technological innovations, but we also publish articles on developing trends in design as well as profiles on past and current icons who have been major influences in architecture and other forms of design,” says Michael, who trained in the United States at the Boston Architecture Center.

He has been very busy these past two years promoting his upscale magazine to an island not generally known for sensitivity to a beautiful or interesting environment. He hopes to change that by supporting intelligent and eco-friendly design.

He writes most of the articles in Think Design based on research and his vast knowledge of the history of art and design, and has never lost his interest in the Thai art community. Last December, he produced one of Phuket’s largest art festivals at the Royal Phuket Marina, which was a showcase mainly of local painters with some international artists as well.

“It then occurred to me that we could produce art dinners on a regular basis, promoting one Thai artist at a time. This would be a great way to expose the local talents and provide an entertaining evening for those who care about painting. The objective of these art dinners is to encourage artistic cross pollination of art through different mediums.”

He began to produce these art dinners earlier this year at such prestigious locations as Andara, the Centara Grand, Le Meridien Phuket and at upscale beach clubs such as ‘Up’ at Nai Thon and Bliss at Bang Tao.

His formula for the evening is quite unique. He chooses a local artist that he believes deserves the exposure and then chooses six of their paintings. Then he gives them to the Executive Chef at the venue who visualizes and designs an artistic six course gourmet dinner inspired by each painting. The meals are joined with wines to match.

Before each course, a painting is presented and Michael describes the techniques and the influences drawing upon his vast knowledge of art. Then the chef describes how the painting influenced his choice of each entrée by ingredients, shape and color. It makes for a stimulating environment where what the eyes see and what the tastes experience are meant to combine for an extraordinary marriage of arts.

Last week, the Think Design Art Dinner was held at the Kata Beach Resort, featuring painter Inthira Plangklang, who has a studio at Surin Beach. Inthira has been painting for more than 10 years, working at learning her craft with other painters as well as some university training. She is drawn to abstract paintings, but ones with a meaning.

To match her painting, Executive Chef Soonthorn Ratchpol created a dish he named Oyster Tower, which reflected her use of gold leaf and used a marine theme.

Italian Chef Massimo Marcato, who is part of Chef Soonthorn’s team at Kata Beach, provided half of the menu’s cuisine, including the dessert finalé named ‘The Balance’, which imitated Inthira’s painting of swirling figures and bright colors.

The six paintings ranged from softly muted meditations on loss to celebrations of Thai culture with the references to rice fields and elephants, culminating in a six-panel explosion of dancing red-and-orange design motifs cut through by a stripe of gold leaf.

The cuisine produced at Kata Beach Resort, hosted by General Manager Andrew Sawatpakdi, was equally exciting with courses such as the Naked Prawn, the Flooding Scallop and a Lobsterlamb duo accented with a tomato reduction.

The Art Dinners are proudly sponsored by the Phuket Gazette. The next one will be on July 20 at Dedos Restaurant. For more information, please contact info@thinkdesignmagazine.com.

Phuket Lifestyle: A head start ahead of the rest

Phuket Diving: Rhythm of the night