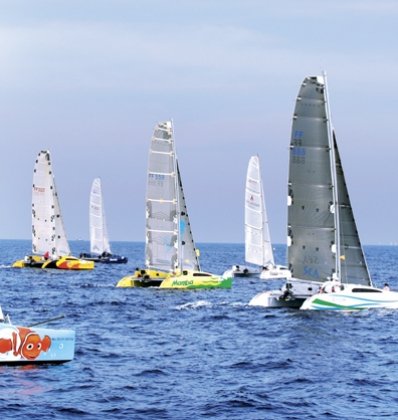 This popular sailor’s regatta is unique in that it’s only for multihull yachts; crews that normally sail on monohull boats get the chance to try multis – often for the first time.

The event will take place in Chalong Bay, under the auspices of the Ao Chalong Yacht Club (ACYC – click here for map). The fifth annual Multihull Regatta has 3 new sponsors this year, and, consequently, new party venues.

After registration on July 12, racing will be held to a tried and tested formula. The event will consist of two races on both Friday and Saturday, with a final race to be held on Sunday – all races to count.

There will be prize-giving and a party on Friday, July 13 at the Palm Garden resort in Chalong, and Saturday in the early evening at the ACYC. The final prize-giving and party will be held at Serenity Resort and Residences on the last day of the races, Sunday, July 15.

A new award will be given out this year at the sole discretion of the race committee, which will weigh a number of factors that may include anything of merit observed throughout the races – not just the boats’ scores.

“At the end of the regatta, it will be a bit like the Oscars,” says Peter Dyer, event organizer. “Individuals can nominate whomever they choose for the ‘Outstanding Contribution Award’.”

Registration will begin at 6pm tomorrow (Wednesday, July 11) at the ACYC, where contestants can collect their regatta information packs, including t-shirts, racing instructions and other notices.

The competition will have two categories for contestants – Firefly 850 one designs and Ocean Multihulls.

This year, in the Firefly class, there will be two new owners, two charters, and an unknown quantity on Sea, to challenge the consistency of Moto Inzi (the longest owned boat) and Voodoo Child. Both boats are expected to place in the top three this year.

The Ocean Multihull lineup looks to have stiff competition with local winners such as Miss Saigon, Sidewinder, Thor and Da Vinci, all set to be challenged by a new Sea Cart 26 “Sweet Chariot” and a new Sidewinder. In addition, there are a number of well-sailed Corsairs and other local multihulls who could steal the show – remember what happened at the Bay Regatta!

Event organizers say they will run a class for cruisers as well, if four or more enter, and would give them a handicap to make the racing fun.

Phuket Live Wire: Scratch that, CAT is back