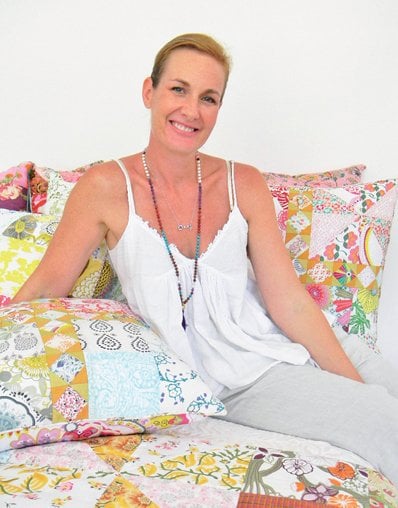 PHUKET: Island Bliss sits next to the upscale wonders of Surin Plaza and features the designs of Cassie McMillan, an Australian who has settled on Phuket for the wonderful island lifestyle.

She is no stranger to Asia as she lived in Hong Kong as a child where her father worked in import/export. She set up her own clothing and interior design boutiques in Phnom Penh and Siem Reap in the 1990s.

“My mother works in fashion and designs for the home and she has been an enduring influence. I took a design course in Melbourne at the Prahran TAFE and opened my own company, Toujours L’Amour, which featured my own hand-painted silk sleepwear and lingerie.”

After some time spent traveling in Europe collecting new ideas, she returned to Australia and worked in retail shops in charge of visual merchandizing, creating the looks that would appeal to customers.

In 1995, she went to visit her father who was then working in Phnom Penh and she immediately saw the possibilities of opening her own store offering beautiful clothing and home décor items primarily for the city’s considerable population of international women.

“I opened Bliss the following year to a hearty reception. I chose the name as I wanted a word that would describe the feeling of someone who bought from my store. I designed and manufactured in Cambodia using only natural fibers that would be lovely to wear.”

From a small operation in Phnom Penh’s French quarter, she moved Bliss to the trendy Street 240 in 1998 where she continues to offer the highest quality cotton with her original prints, primarily on women’s and children’s clothing.

In addition, there are handmade cotton quilts and even a signature spa upstairs where she formerly lived with her husband and children.

Cassie also imports products from Australia that are popular at her shops, including bedding, spa products and cotton underwear.

“I maintain a small staff so I can control quality. There is always a problem with being copied by others so my job is to keep the designs fresh.”

She travels to India each year where she works with a family in Rajasthan who use her original designs and makes the block prints that she uses on her high grade cotton.

With a partner, she opened another boutique, Jasmine, in both Phnom Penh (also on Street 240) and in Siem Reap, near the elegant FCC compound, offering the highest quality Cambodian silk fashion for women.

In 2008, with her young children in school, she decided to relocate the family to Phuket.

“I spent three years at home and traveling to my shops in Cambodia. I decided to look around for a place in Phuket to open a shop where I could offer the products I create.

I found an ideal building near the Surin Plaza where I opened Island Bliss nine months ago. I offer a collection of my own creations of leisure and elegant clothing ideal for this tropical beach location.”

Pinky’s Place in Phuket: Why it’s hip to be seen there

Phuket Gardening: They’ve got it made in the shade