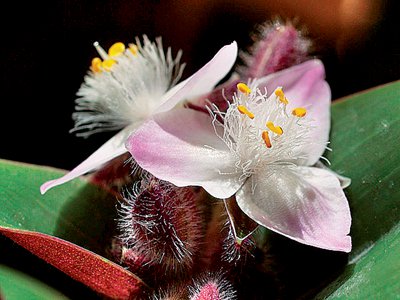 PHUKET: Planting some ground cover plants is a practical move that will add exceptional interest to your garden. For now, I’m going to pass on the most common ground cover plants in Thailand, such as the spider lily and the spiral ginger, both of which attain heights of over 50 centimeters and are practically employed in undercover environments all over Phuket.

Instead, I will describe those unobtrusive plants that hug the ground, and rarely trouble their loftier neighbors.

Ground cover plants are valued for several reasons. They look decorative; they provide a sort of natural mulch by aiding the retention of moisture; and, most importantly, they perform a valuable function in carpeting those bare and unsightly areas in shrubberies and borders. They can also be used in containers where their foliage provides an attractive contrast to the grander incumbents of pots such as Euphorbias or desert roses, shrubs which reach skywards, unimpeded.

Common throughout the tropics is Tradescantia spathacea, a member of the spiderwort family, and more familiarly known as ‘Moses in a boat’. It has characteristically dense rosettes of lance-shaped leaves that are dark green and often glossy above, and purple underneath.

Though it hails from Mexico, this vigorous grower is available in garden centers everywhere in Phuket, usually potted in small plastic containers. The fleshy root system is shallow, and the plant can easily be propagated from cuttings, especially if you remove a small piece of root with the stem.

Because it’s an understory plant from the tropical woodlands, it likes moisture and some shade, though the leaves may lose their purplish underside in very low light. This is hardly a problem in Phuket, but it’s an issue sometimes when the spiderwort is grown as a house plant in temperate areas, as it often is.

Here in Phuket, it can be grown outdoors, singly or in clumps, and its neat habit makes it suitable as a border plant, or for edging pathways. By the way, it got its name because the small, white, three-petaled flowers appear between boat-shaped bracts in the axils of the leaves.

As with so many plants, hybrids are beginning to appear in garden centers in Phuket. Look out for a pretty, variegated cultivar with striped foliage in shades of yellow, pink or deep purple.

The purple heart, or Tradescantia pallida, is another much cultivated member of the family. Again, it may be a familiar houseplant to European and American readers. Its leaves are a similar lance shape, but are a striking shade of smoky purple. It has small pink flowers, but it’s also grown for its foliage.

It is less durable than its relative, has brittle stems, and a trailing habit. The other small drawback is its attractiveness to slugs and snails – you may need to protect your new plants with slug bait.

As with ‘Moses in a boat’, it needs some sun to produce its most attractive hues. However, it’s even easier to propagate from cuttings, so beg a few snapped off stems from a friend if you want to introduce it to your garden. Given the right conditions, it will spread quickly. Yours truly has many flourishing in pots alongside their bigger brethren.

A less widely known plant is Hemigraphis alternata which comes from Indonesia. Like the purple heart, it has a trailing habit and is often seen in hanging baskets. The oval leaves are metallic green on top and purple below.

Already, cultivars are appearing, one with turned down leaf edges (exotica), and another with long, notched foliage (repanda). To discover them though, may require some undercover detective work in local nurseries.

Gardening Tip of the week

EVERY Thai garden should have its share of orchids. They are the biggest and perhaps oldest single group of perennial herbs, and have arguably the widest range of forms and colors of any flowering plant.

Contrary to popular belief, orchids are relatively easy to cultivate. They have aerial roots and they are mainly epiphytic – their natural tendency is to anchor themselves to forks and crevices of tree limbs. Only a few terrestrial orchids grow in conventional soil, so, not surprisingly, they need relatively little water, and most thrive in filtered sunlight.

Of course there are variations. Orchids with thick, leathery leaves need more sunlight than those with long, thin foliage. The former retain moisture by means of a waxy cuticle which limits evaporation. In the garden, they are best grown in hanging baskets which offer some similarities to their natural conditions.