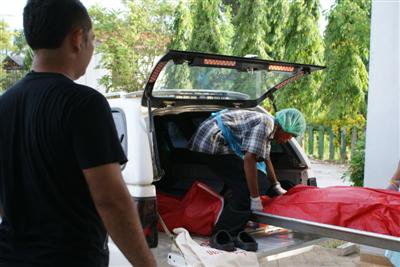 PHUKET: The governor of Krabi has named the provincial police commander as the only person authorized to release information to the media concerning the deaths of Noemi and Audrey Belanger, Canadian tourists who died of apparent poisoning on Phi Phi Island last week, the Phuket Gazette has learned.

Recently-released media reports have revealed that the hotel’s CCTV system captured images of an unidentified man assisting the sisters back to their room at the Phi Phi Palms Residence resort in the early hours of June 13.

The man, believed to be a foreigner, was seen at 1:10am with one sister; then again at 1.14am helping the other, according to the time stamp in the surveillance footage.

These were the last times the two sisters were seen alive.

Assisting with the forensic investigation, Dr Jakkarat Pittayawong-anon, a specialist from the Bureau of Epidemiology, Department of Disease Control, arrived with his team on Phi Phi Island on Wednesday to collect more evidence needed to discern the exact cause of the sisters’ deaths.

“I’ve come to inspect the scene at the Phi Phi Palm Residence Hotel where the two sisters died. I will also be examining stores and restaurants in the area.”

“We will collect samples for further examination in the hope that it will provide answers, allowing us to determine the cause of death. Once we have compared our findings against the postmortem examination results we will submit a report to the Krabi Provincial Office and Krabi Public Health Office,” he added.

Phuket Sports: The other Euro tussle