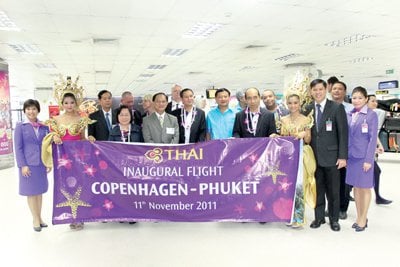 Arriving the next day, the flights will be served by a Boeing 747-400 and seat a maximum of 416 passengers, he said.

However, the governor pointed out that Danish tourists will not be able to fly directly back to Copenhagen from Phuket.

The return trip will require a transit flight via Bangkok, several of which are available from Phuket on a daily basis, he noted.

Mr Suraphon went on to highlight the growing market of Danes, citing the following figures.

Asked about what negative impacts the flooding crisis has had on the tourism sector, Mr Suraphon downplayed such notions and echoed previous statements given by various officials.

“Tourists coming to Thailand in the first nine months of the year increased by 27 per cent compared to last year,” he said.

“During the flood months, namely October and November, tourist numbers decreased only about two per cent, which is not much of an impact,” he said.

Mr Suraphon added that the government is planning to launch a post-flood tourism revival campaign, which he said is scheduled to begin next month.