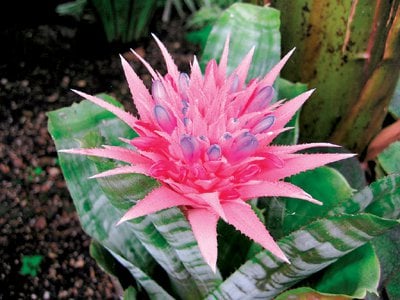 PHUKET: Most people in Europe encounter their first bromeliad, without ever realizing its collective name as a fruit that tastes deliciously different, and can be eaten fresh or canned. But the pineapple is only one member, and indeed the only edible member, of a family of plants that comprises more than 3,000 varieties.

Among bromeliads grown solely for their good looks, the aechmea is perhaps the best known; it has been cultivated as a house plant in temperate climes for at least 150 years. Unsurprising, when one considers its dramatic appearance and its capacity to survive in low light conditions.

What makes the aechmea so distinctive is both its foliage and its floral arrangement. The spathe-shaped leaves, grey-green and cross-banded with silver, form a neat, water-tight rosette, allowing a reservoir of rain-water to accumulate at the center. Fasciata, the most widely grown cultivar, has these characteristic leaves and from the central cup sprouts a cluster of rosy-pink bracts in which nestle pale blue flowers that change to deep rose. No wonder the Victorians loved its exotic appeal – a plant like none other in the Old World.

Nowadays, there are the inevitable hybrids. Foster’s Favorite, smaller in scope, has bright red, lacquered leaves about a foot long, “Royal Wine” has an open rosette of green leathery leaves that are burgundy red beneath. It has drooping clusters of orange and blue flowers. However, in the tropics, these cultivars are mainly grown outdoor, and primarily for their foliage. Thus they can be found in good garden centers, suspended in small pots with little soil beyond a handful of coconut fiber or bark. They are becoming more popular as adornments on trellises or tree branches, much in the way that orchids are employed.

In fact, bromeliads have plenty in common with orchids: both are mainly epiphytic, and both come from the tropical rainforest, where they grow in the forks of trees and even on rocky outcrops beneath the canopy. Both are among the most widely patterned and colored plants in the world and both survive, precariously, by collecting detritus such as bird droppings that fall from trees and by absorbing the organic matter contained in rain.

It has been estimated that as many as 170,000 bromeliads of various kinds may inhabit one hectare of tropical woodland. Furthermore, their tiny reservoirs are home to species of tree frog, salamanders, and even, in Jamaica, to a species of small crab. A whole micro-universe.

There are many varieties in addition to the aechmea and its relatives. The largest, puya Raimondi, may grow to four meters with a flower spike up to ten meters. At the other end of the scale is Spanish moss (tillandsia) which hangs profusely from trees and cables in the American South. Other widely cultivated general include bilbergia and neoregelia. They may be worth considering next time.

Phuket books: Battle of the Eco-Warriors

Phuket Lifestyle: Go with the flow