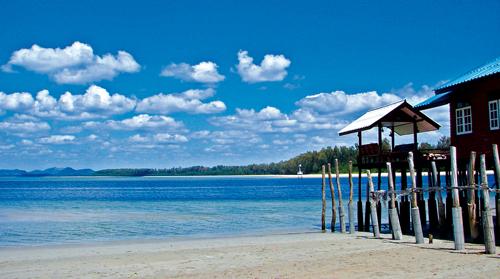 PHUKET: Koh Lanta is about a four-hour drive south of the Sarasin Bridge and has been described by many as ‘paradise postponed’. The reason is that access to this lovely island is constrained by the need to cross two small pieces of sea by two extremely slow and decrepit vehicular ferries, which can take up to two hours to negotiate, often in blazing sunshine.

Hence, the island is still largely undeveloped in the mainstream touristic sense, although there’s an abundance of bric-a-brac backpacker-style guest houses, bars and internet cafes strung along the cratered road that runs through the town of Saladan where you disembark.

I’ve been to Lanta quite a few times, starting in 2003, and this time I felt sure that the roads would be in good enough nick to accommodate the thin tires of my new Italian road bike. In this I was wrong. The roads are, if anything, degenerating, with some shocking ridges and furrows in the concrete. So, with hindsight, I highly recommend taking along a mountain bike if you do undertake a trip to Koh Lanta.

The island is a long narrow teardrop running north to south. It’s about 16km long and no wider than 4km at its thickest point. There’s basically one road that runs around the perimeter and two cut-through roads that slice across the central ridge of hills that run down the spine of the island. That’s it folks… It’s charmingly quiet, bucolic and impossible to get lost!

Our plan was to ride the length of the island to the national park at the southern tip and then go on a hike, prior to staying the night at the luxurious Pimalai Resort and Spa and dining with the general manager Franck de Lestapis at the lovely beachside barbecue restaurant.

The road south from Saladan is pretty flat and runs parallel to the beach, but is bordered at first by a clutter of ramshackle bars, guesthouses, massage joints and billboards exhorting you to join the next ‘full moon party’ at dubious-looking bars up in the hills. After 5km of this, the building frenzy declines, and at last the road begins to run along the comely beach itself, providing stunning views out across lower Phang Nga Bay, with the most dramatic silhouette of the limestone karst island Koh Ha seemingly hovering within the heat haze on the horizon. There are a couple of laid-back beach bars here, worth a stop for a refreshing juice and a plate of fresh fruit.

As you enter the southernmost quarter of the ride, the roads start to buck and weave like the back of an irate snake, with some vertiginous climbs and descents which are made all the more hair-raising by the appalling state of the road. Most definitely great care needs to be taken here, particularly on a road bike. In compensation, the scenery is pretty sensational, with great vistas across the surrounding sea.

At the park gates we were charged the foreigner price of 200 baht, but the walk through pristine rain forest down to Ta Noad Cape at the island’s south was invigorating and we saw only two other hikers during our two hours on the trail.

We cycled back north for five kilometers to Pimalai Resort, which occupies a stunning amphitheater within the rain forest overlooking beautiful Ba Kan Tieng Bay. Pimalai is without exaggeration one of Thailand’s premier resorts and its pristine beauty is unsurpassed. Franck de Lastapis, its convivial GM, is an old friend. He gave us a beachside villa for the night which commanded sensational sunset views; a session in their tropical garden spa; and a beachside seafood supper of fresh red snapper and crunchy veggies that we washed asunder with a NZ Sauvignon Blanc, and made all our leg pains evaporate.

Our second day dawned with laps in the huge Pimalai infinity pool and a Herculean buffet breakfast, our flagrant calorie uptake being self-justified by the day’s cycling ahead.

We cycled back north for a few clicks then took the right turn onto the cut-through road that leads up and over the central hills and then down into Lanta Old Town. This is a charming Muslim fishing village with many of the houses built on stilts out over the water and a long pier thrusting eastwards into the sea. It’s decidedly sleepy with somnambulant dogs gracing the middle of ‘Main Street’ and some nice cafes in which to linger over a coffee and cake.

We dropped into Mango House, which is run by an old friend named Duane Lennie, who has been living there for the last 12 years. We caught up on the local gossip mainly concerning plans to build a bridge across at least one of the stretches of water connecting Lanta to the mainland. But as this has been mooted for as long as Duane can recall, it’s one of those ‘believe it when you see it’ stories.

Eventually we re-mounted and cycled a charming stretch of road that took us up the island’s east coast, avoiding the sundry water buffalo and chickens, to the cut-through road that leads back to the west coast and the final 6km to Saladan Town for lunch and then the ferry back to the mainland.

We took our time cantering around Lanta and it can certainly be circuited in a day if you wish. It’s a charming escape from Phuket and rather charming in a quaint, old-fashioned way. But next time I go I will be sure to take my mountain bike!