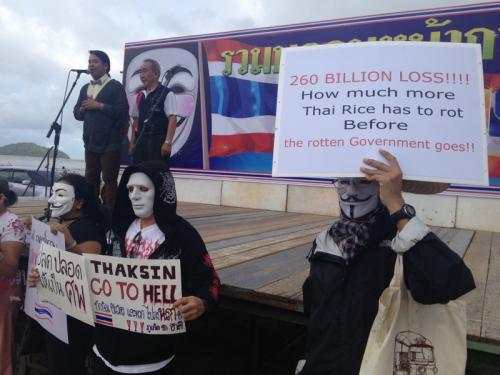 “We are not a mob, we have gathered to let the government know that their management of Thailand has failed,” said a statement issued under the name of V-Phuket to the media during the protest yesterday.

The catalyst for the V-Phuket protests was the same that drew hundreds of community members organized by the ‘We Preserve Phuket Club’ to Provincial Hall in protest Friday (story here): the thinly veiled threats of Deputy Prime Minister Plodprasop Suraswadi against the people of Phuket concerning the cancelled International Convention and Exhibition Center (ICEC) project (story here).

“Phuket is next on the list for a convention hall after we finish the one here,” Deputy PM Plodprasop said in Chiang Mai. “But I will not allow it to be built. We might build it if Phuket people vote for the Pheu Thai party, but if they don’t, that building project is not going anywhere,” he said.

“We need a government that is fair to all of its people. Phuket earns a lot of money for the entire nation, but our ICEC project was cancelled. For Plodprasop to say such a thing is a total disgrace,” the V-Phuket statement said.

Despite Deputy PM Plodprasop’s apology to the citizens of Phuket, the people at the protest demanded that he still be relieved of his position.

“We want Plodprasop deposed even though he has apologized – we will never forgive him,” the statement said. “We will not accept a tyrannical government anymore.”

“We are all Thais. We must protect our rights to receive from the government without corruption,” he said.

Mr Jittakorn made it clear to the thousands in attendance that the protest was not about toppling the government, but about changing “the management team”.

“We need to let the government know that we will not continue to suffer under its rule. We have chosen white masks to represent the supporters of Thailand because it is not about yellow shirts or red shirts; it is about stopping the flagrant abuse of power.

“We will not stand by as people seek only personal gain after they have been voted into power by the people, for the benefit of the people,” Mr Jittakorn said.

“For 17 months, Yingluck Shinawatra has not worked for all Thai people. She has worked only to help those that voted for her and for the benefit of her relatives. She has not shown the details of our country’s budget or presented a summary of the results to the Thai people.”

Mr Jittakorn attacked many of the actions carried out by Deputy PM Plodprasop and the Pheu Thai Party.

“Plodprasop refused to allow the Thai people their legal right to participate in the 350-billion-baht water-management project. He refuses to even consider the opinions of those who do not agree with him,” Mr Jittakorn said.

Many of the masked protesters held signs denouncing the handling of the rice-pledging scheme.

“The guaranteed rice prices were designed to just give more money to the Pheu Thai Party’s supporters,” protester Mongkol Rattana told the Gazette.

“It has has been the source of about 260bn baht in losses. This is a complete failure of money management,” Mr Mongkol said.

As the protesters attacked the rice-pledging scheme on Phuket, opposition leader Abhisit Vejjajiva attacked it at his own press conference, reported The Nation.

Former prime minister Abhisit confirmed the Phuket protesters’ claims that the project had suffered a loss of 260bn baht.

Mr Abhisit went on to say that only 80bn baht of the state subsidies had reached the farmers, while massive amounts of money were wasted through corruption (story here).