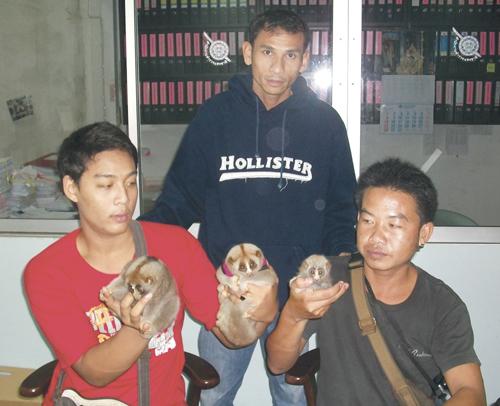 PHUKET: A recent Phuket Gazette article offered some encouraging news for environmentalists. The Deputy Mayor of Patong has acted to stop touts from charging tourists. For what? For having their photographs taken with slow lorises. He is on record as stating that ten arrests have been made, adding: “The crackdown will continue because such activities are upsetting and annoying to tourists, who continually complain about them.”

It was not recorded what complaints, if any, Thais might have voiced concerning the practice.

A step in the right direction? Absolutely. But kowtowing to tourist reactions, protecting Patong’s “good name” is far from being the core of the issue. What should be everyone’s concern is that this activity is only one small symptom of the cruel and remorseless Asian trade in wild creatures, either for the so-called “pet trade”, or for their use in traditional medicine – usually a euphemism for ingesting body parts to boost sexual potency.

Think rhinoceros horn or tiger penises. Recently, 600 cobras were discovered in crates in a southern province, destined for the Chinese market. Unusable as pets, they would have ended up in Oriental restaurants as an expensive addition to some rich man’s libido-enhancing lunch.

Cobras are not an endangered species in Asia. Slow lorises are. Hardly surprising. The loris is a small, cuddly, ‘teddy-bear’ of an animal, adorably cute. Technically a pre-monkey, it has thick, soft, finely marked fur, and huge, dark-rimmed eyes. It moves slowly and deliberately, and possesses a quiet nature, which makes it seem ideal as a pet. Apparently it is much sought after by Japanese ladies.

But consider these facts. There are only five dwindling species of slow lorises, from the pygmy (which weighs only a few ounces) to the Bengal loris, which may tip the scales at four pounds. Scarce anyway, their rainforest habitats have been systematically destroyed, so they have difficulty in moving between patches of woodland. And though they have few natural enemies – mainly snakes, orangutans or eagles – they have fallen foul of the ultimate predator – man.

Nocturnal by instinct, lorises can be readily discovered by the light of a powerful beam, since their huge eyes reflect the light. And since, like agamid lizards, they freeze in self-defense, they are easily caught.

In Thailand they are openly sold in markets such as Chatuchak in Bangkok for the pet trade and in neighboring Vietnam for ‘traditional medicine’ (that phrase again). Folklore has it that the slow loris, maybe because it can use its vice-like grip to cling to branches for hours – has supernatural powers. So its flesh is an aphrodisiac and associated with sexual prowess. Other Asian people consume it to bring good luck and ward off evil spirits.

If, in these circumstances, the inevitable fate of the loris is to be killed and eaten, you may conclude that being kept as a pet is a preferable fate. Alas, you would be wrong.

Nature has endowed the loris with one defense mechanism – a toxic bite. The poison is produced by a gland on the animal’s arm: mixed with saliva, it becomes a powerful deterrent to would-be predators. Hardly in keeping with a cuddly pet. So what do the pet-traders do?

They either cut the tiny teeth with nail-clippers or, even more barbaric, remove them with pliers. Little wonder that between 30 and 90 per cent of lorises die in captivity – from infections, an inability to feed properly, from diabetes caused by an unsuitable diet or simply from stress. And they are often taken when young, snatched from their parents before they are capable of grooming and cleaning their own thick fur.

Worst of all, none of these lorises can be returned to the wild. A lingering death is the most they can hope for.

Phuket Lifestyle: Food, games, music and fun, and all for charity

Phuket Lifestyle: The boat that rocks!