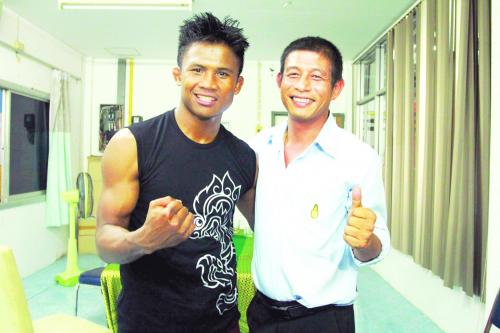 PHUKET: Buakaw ‘Dam Dot Com’ performed an artistic demonstration of ancient Muay Thai against two opponents at once, at the Patong Boxing Stadium recently, in front of thousands of cheering fans.

Formerly known as ‘Buakaw Por Pramuk’, before a longstanding dispute with his former gym forced his early retirement last year, Buakaw has reclaimed his given name Sombat Banchamek, but he also goes by his ring name Dam Dot Com.

He is a two-times Thai Fight champion, two-times K1 World Max Champion and holds a professional record of 208 Wins (54 (T)KOs), 21 Losses and 12 Draws.

Buakaw took on opponents Khun Kaokanlek and Khun Paochee Khaovijit in a mock fight after performing the ancient Wai Kru Ram Muay dance, a Nok Muay’s (fighter’s) salute to their teachers and ancestors.

Tourists were impressed by the performance and the demonstration drew thunderous applause and adulation for the veteran fighter.

After the show, Buakaw greeted fans, signed autographs and took photos with those in attendance.

Buakaw, or Dam Dot Com said, “I am impressed to see so many Muay Thai fans, be they Thai or foreigners. Thank you all for the warm welcome you’ve given me,”

“Phuket is a world class tourist attraction and has a lot of Muay Thai training camps, which support the sport and help to make it better known around the world.

“I personally love Phuket because there are a lot of beautiful beaches and tourists with happy expressions. I look forward to coming back again,” he added.

Kathu Municiplaity Mayor Chaianan Sutthikul, who is also the owner of the Patong Boxing Stadium, said, “The stadium has been open for 10 years now and this fight can be considered historic because Buakaw was here to perform Muay Thai for the fans.”

“The fight was stunning even though it was just a show, not a real fight with violence. The stadium was crowded with Thais and foreigners alike,” said Mr Chaianan.

“We collected two million baht in ticket sales so Buakaw will definitely have another fight in Phuket in the future,” he added.