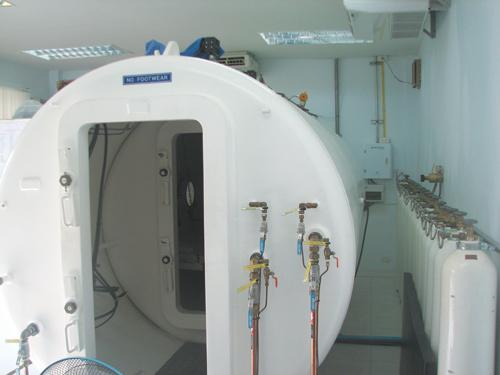 PHUKET: Recovered from her diving accident, Nicole still combs through the details of the day, searching for the tiny factors that might have contributed to the serious case of neurological decompression sickness (DCS Type II) she faced a year and half ago after a 22-meter dive in the Similan National Park.

Unless it’s a ruthless horror story about DCS, where a diver clearly did something wrong, many of us squirm when talking about getting “bent”. Though few will admit it, judgment is passed on those who have suffered from DCS. There is a fundamental assumption that a diver “must have done something wrong to get bent” – but most haven’t.

The rules we follow – not working out after diving, getting a full night’s sleep and following conservative dive profiles – are all designed to minimize the risk of DCS so that we can
enjoy the beautiful wonders below the water’s surface. Nonetheless these risks can never be entirely eliminated.

Nicole, an experienced diver with over 200 logged dives since 1994, did not surpass her decompression limits, she did not ascend too quickly or skip her safety-stop – she made her third dive of the day on Barracuda Point well within the limits of what is reasonable.

“We went down to 22 meters and came slowly up to 10 meters, stayed between eight meters and 10 meters for a while, and then did the safety stop at five meters and came up to the surface. Our total dive time was 47 minutes,” Nicole recalls.

Looking back at the day, Nicole remembers the heat and a mild headache before splashing in, perhaps signs that she should have sat the dive out… but almost every diver is regularly willing to jump without feeling “100 per cent”. A little hot from a wetsuit, a little nauseous from seasickness, the symptoms and justifications go on.

“I just had a mild headache, but it was a very hot day. So we stayed in the shade and drank a lot of water,” Nicole explained.

“Some inexperienced divers told me that they were diving and had no problems, so I must have done something wrong. Experienced divers don’t think that it was my fault – they know that sometimes ‘it just happens’ and that it can happen to anyone,” Nicole said.

Groups have systematically ostracized those things and situations they don’t understand, often fearfully casting them into the realm of myth – divers are no exception. However, as we continue to explore our world above and below the surface, our understanding of it grows and we are able to shed the baggage of myth and see the world for what it is. As happened to Nicole and countless others (there is no single organization that provides DCS statistics or data), DCS can take hold of a diver without a clear single factor to isolate and avoid.

Despite years of research, our understanding of the tiny microscopic bubbles that cause DCS still lives in the world of theory.

“The current thinking is that bubbles exist to some degree in the body after all dives. If the bubbles are few and small, they have no effect, but if they are plentiful, their volume can be large enough to cause decompression sickness,” explains the PADI Encyclopedia of Recreational Diving.

Most scientists, though not all, are fairly sure that these tiny microscopic bubbles are created within our supersaturated tissues after a dive, through a process known as nucleation. What they are less confident about is what factors will increase the rate at which these bubbles are produced and what combination of factors will take an individual diver beyond the limit of safe diving.

Seven months later, after hours of being treated in a hyperbaric chamber in Phuket, Nicole stood on the dive platform of a boat in Egypt – cleared to dive.

“Standing on the boat platform my heart was beating like it was going to explode. I was asking myself, ‘will something happen again when I go underwater?'” Nicole said.”I wanted to dive, it was just three seconds away.”

Nicole, after suffering from a severe case of neurological DCS, took the plunge, and again joined the ranks of recreational divers and explorers around the world.

Phuket Books: One more head for the chopping block