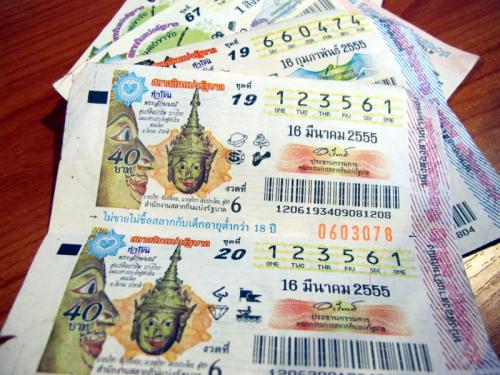 PHUKET: To dispel rumors of the national lottery being rigged, the Government Lottery Office (GLO) will be staging one of its lucky draw mobile events in Phuket at the Metropole Hotel in Phuket Town (map here) on March 1.

“The rumor was started by a scam letter which guaranteed that the numbers people chose would be drawn, for a fee,” Phuket public relations chief Punyawee Thongsiriseth explained.

“The lucky draw mobile event is meant to give people an opportunity to see the lottery draw process, including the equipment they use during the drawing,” Mrs Punyawee said.

“Phuket Governor Maitri Inthusut will chair the event, and other Phuket dignitaries and local leaders, as well as the press, will be present,” she said

A local government officer will join the GLO staff in choosing the lucky numbers, she explained.

“After witnessing the process, people will no longer believe that the lottery can be rigged,” Mrs Punyawee added.

GLO will hold a talk from 9:30 to 11:30am at the Metropole Hotel, the day of the drawing, on the topic “Do you believe in a rigged lottery?”

The drawing itself, starting at 2:30pm, is open to anyone interested in watching in person, though it will be necessary to show an official form of ID.

It will also be broadcast on The National Broadcasting Services of Thailand (NBT) from 3 to 4pm and on Radio Thailand at 2:30pm.