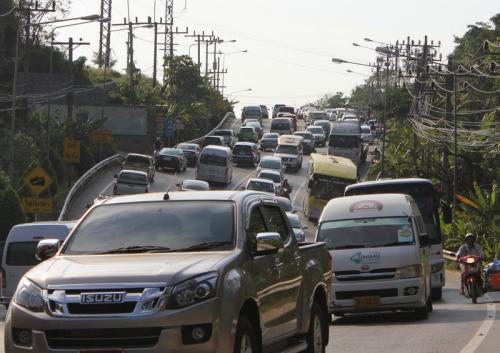 PHUKET: A tour bus fleeing the scene of an accident suffered brake failure and crashed into a utility pole on Patong Hill yesterday, causing a three-hour traffic jam.

Patong Police received the accident report at 4pm and arrived at the scene to find that the bus driver had fled.

“The bus driver sped up and drove away after the collision with the motorbike driven by Suriyawadee Uba, 54,” Lt Col Nikorn said.

“Ms Suriyawadee suffered injuries to her face and arm, as well as a broken leg,” he added.

On the way down Patong Hill near Wat Suwankiriwong (map here), after the accident with Ms Suriyawadee, the brakes on the bus failed . With no brakes, the out of control bus hit a utility pole, Col Nikorn said.

“We had to close one of the lanes for Patong-bound traffic on the hill, causing tailbacks for three hours,” he said.