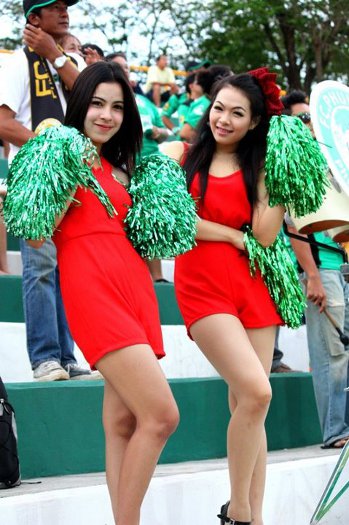 There was some concern that Phuket FC might be overconfident going into the match. The Islanders were coming off a big win against Bangkok FC, their first home win of the season, and taking on last place Chanthaburi, winless all year and recently suffered two lopsided thrashings at home: 0-7 and 1-9.

However, word that the Hares’ foreign players had rejoined the team after resolution of a pay dispute led the Phuket FC coaching staff to warn the boys not to take the team lightly. Another cause for concern was Brazilian goalkeeper Alonso da Silva was among four Islanders serving a penalty suspension.

Concern turned to worry just two minutes into the match, when what seemed an innocuous cross by Chanthaburi forward Prawit Wasuntara created confusion between Phuket FC’s reserve keeper and his defender, with the ball deflected into net at the near post.

Some 2,200 fans who turned up for the match, almost double last week’s total, were initially stunned – including a small contingent of die-hard Chanthaburi supporters dressed in yellow who made the long-haul bus ride to the match.

However, fears that the opening salvo marked the emergence of a new breed of “killer rabbit” turned out to be short lived. The Islanders took the wake-up call in their stride, with Phuket’s star defender Nene Bi going on the offensive and blasting home a botched save right on the goal line in the sixteenth minute.

To see this and all goals in the match click here.

Subsequent goals by Poramut (Mutt) Kronborisut and then a pair by lanky Ivorienne import Ibrahim Kanoute just before the break signaled that the rout was on as the teams went into the lockers rooms with the Islanders up 4-1.

The second half kicked off in the same manner as the first had ended, with Phuket playing the part of the Energizer Bunnies while the disorganized and underpowered Hares looked more like “The Other Brand”.

With goals having come at a premium for Phuket all season, they responded as if on an Easter Egg Hunt, with goals by Thawin Butsombat (min 53) and Yseongwon Byeon (min 65) followed by a brace from Wacharakorn Klaithin (mins75, 85).

After the match, Phuket’s often dour-faced coach Milos Joksic could hardly contain a smile. He declined to name a ‘man of the match’, saying that the whole team played ‘perfectly’.

The return to health of Thawin Butsombat, the forward who suffered a broken leg in May last year against Thai Honda FC, as well as the performance by Kanoute were both very positive developments, he said.

Coach Milos promised an even better performance by the team in its showdown with Krabi FC on July 7, saying Alonso and other starters would again be available to play.

Asked about a comment attributed to new team president Pamuke Atchiriyachai that the team would be “trying to get a draw” against higher-ranked Krabi, he said that the players trained for and went into each and every match with a single objective: winning.

Phuket FC will get a good workout tomorrow night when they play a friendly match against Wuachon (Fighting Bulls) United, currently ranked 7th in the Thai Premiere League, or TPL.

The team was formed in January this year after Newin Chidchob bought out promoted Thai Division 1 League side Buriram FC and sold the rights to Songkhla FC, which still maintains a team in Thai Division 1.

Wuachon Utd now plays out of Tinsulanonda Stadium in Songkhla Town, drawing as many at 35,000 fans to matches.

In the only other match yesterday, JW Rangsit won at home against Gulf Saraburi, 2-1.