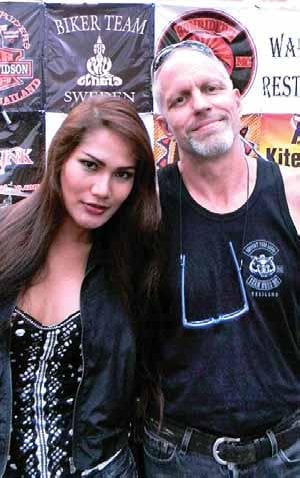 PHUKET: Phuket’s eight different motorcycle clubs came together at Nai Harn Lake last month to show off their big bikes, drink beer, sell the latest in biker fashion and, most importantly, to raise funds for the Life Home Project, Phuket’s shelter for women and children with HIV.

“Super” Mark Johnson, founder of Phuket’s Bike Week, which draws thousands of biker enthusiasts to the island every April, was the primary coordinator for the event.

“This was our second annual biker gathering of Phuket’s motorcycle clubs. We want to support a worthwhile local charity so we invited the children of Life Home Project as well as students from two local schools for a day or fun and games,” he said.

After the children left, it was time for the bikers and their fans to take over the small island which sits in the middle of Nai Harn Lake. From mid-afternoon until late into the night, the rousing sounds of rock music, provided by regional thrash bands, kept the party moving.

The sporadic downpours did not hamper local guitar legend Lam Morrison from taking the stage and playing well past midnight. It did, however, force a cancellation for the night’s featured entertainment, a wet T-shirt contest, which had many local lasses, both Thai and Western, ready to show off their assets.

All proceeds from ticket sales and beer profits will go to the ongoing operations fund of Koh Sireh’s Life Home Project which continues to provide shelter and maintenance for many of the island’s disadvantaged victims of the HIV virus.

Phuket Comedy club back for an encore