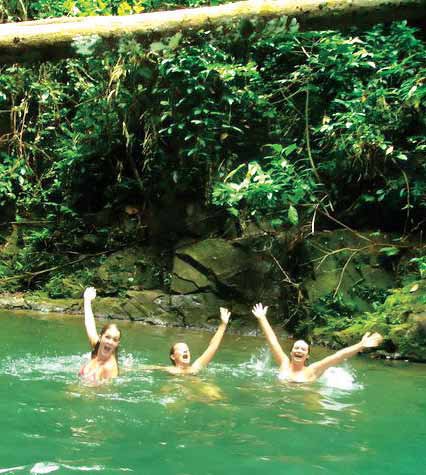 PHUKET: JUST an hour’s drive from Phuket there is a little-known gem called Raman Waterfall. The five-tier waterfall and its emerald pools can be found in Phang Nga, and is perfect for a day trip from Phuket.

The gardens, clean toilet facilities, simple tuck-shop (if you forgot your sandwiches) and peaceful surroundings make it a good place for a picnic. But no booze in national parks, remember!

A two-kilometer hike takes you along the waterfall’s five tiers and up the 100-meter mountain side.

Raman National Park is located within the 125-rai realm of Khao Ton Din National Forest Reserve, so the forest is pristine and is not your average walk in the park.

There’s a variety of fauna and flora to observe, but be warned, the state of the path definitely adds to the sense of being “off the beaten track”.

The waterfall’s five levels are visible as you walk, although access is not as easy as it looks.

Wear some sensible shoes and take your time climbing over the slippery rocks – your hard work will be rewarded by a dip in the refreshingly cool emerald pools at the mouth of each tier.

If you climb to the top you will see the area where “Raman people” are said to have settled during the “Nine-army Battle” to flee the Burmese.

The remote location and size of the waterfall means it’s never too crowded.

The number of pools – and their relative inaccessibility – means you may well have a pool
all to yourself.

To get there by car, cross the Sarasin Bridge and keep going straight on Route 4, veering right when the road forks 20 kilometers after the bridge.

It’s smooth sailing for another 25km, which is when you see signs for Raman Waterfall on your left. There’s a temple called Wat Suwannakhuha (also worth a look) where you will need to turn left off the main road.

After that, you drive into the village for about 5km, take the next three left turns, and you’re there.

Bring mosquito repellent, towels and swimwear. Don’t worry about when to go – water cascades down this waterfall all year round.