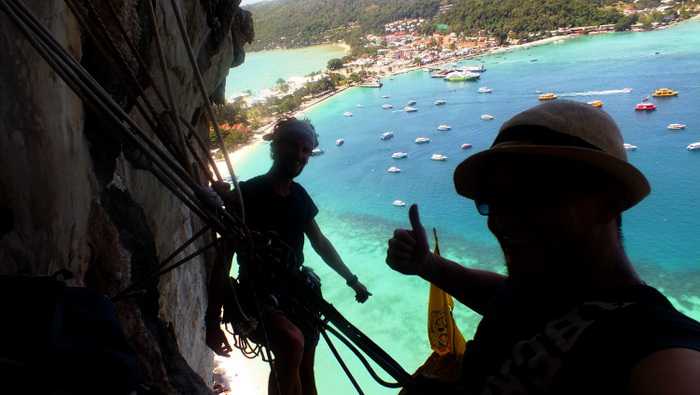 PHUKET: Koh Phi Phi Don – better known by the nickname Phi Phi – is loaded with surprises no matter why or how you end up there.

Despite being less then an hour’s journey from Phuket by speedboat, or a two-and-a-half-hour ferry ride, Phi Phi is in Krabi province. It is composed of two main islands: Phi Phi Don and Phi Phi Ley.
And there is more to Phi Phi Don than the hedonistic mayhem that puts the island on every 20- plus-year-old backpacker’s to-do list in Thailand.

Phi Phi Don can be broken down into three sections with three distinct vibes: Ton Sai Bay – party central and dive-bum paradise; the north – so serene that the moon is the only one partying after 8pm; and Long Beach – the middle ground.

If you take the ferry from Rassada Pier in Phuket and disembark at the pier in Ton Sai, it’s easy enough to hire a longtail “taxi” to get some distance between you and the party scene. Longtails to Laem Tong, at the northern tip of the island, cost about 1,000 baht, though it’s possible to get the ferry there for 200. Those wanting access to what’s happening in Ton Sai, but also wanting a clearer view of paradise, can get a longtail to Long Beach for 200 baht.

Or, you can hike it. A fairly well-marked trail runs east to Long Beach, offering some scenic views and plenty of places nestled into the “jungle” where you can stay, or at least stop for a bite and a drink. Those feeling ambitious can hike all the way to Laem Tong – though it’s not recommended if you’re carrying luggage. Hike to the Phi Phi viewpoint and then to Lo Bakao. From there, just follow the coastal path.

Ton Sai is a strange place, one which begs the question, “Is this Thailand?”

Though a Thai national can be spotted from time to time, the number of foreigners in late their teens to early 30s is overwhelming. The place feels like the setting for a classic Hollywood college movie. (For Ton Sai party scene information, see the to-do and not-to-do list.)

If Ton Sai’s nightlife doesn’t fit into your ideal holiday, take advantage of its more charming and redeeming qualities, most notably the climbing and diving.

Ton Sai Tower, at the western end of Ton Sai Bay, offers a range of climbing grades – perfect for climbers who like to party and partiers who like to climb.

The classic Krabi-style cliff face provides some pumpy over-hanging routes and plenty of interesting lines on slightly over-hanging to semi-vertical walls. Bring your own gear or hit up one of the climbing shops in town to get what you need to see a view that puts the Phi Phi viewpoint to shame.

If you would rather not see the beauty of the island by going up, take the plunge to see the wonders below the surface.

Ton Sai is jam-packed with dive centers offering a variety of different dives – many now touting a new shipwreck. Sitting at a maximum depth of 26 meters, the 47-meter Royal Thai Navy ship Kled Kaeo was sunk this year to give a boost to the tourism industry. Go check it out.

Luckily, you don’t have to base yourself in Ton Sai to take advantage of the tropical coral reefs in the Phi Phi Marine Park.

Many of the high-end resorts in the north work in conjunction with quality dive shops and some even have them on site.

Those travellers who want to straddle the serenity of the isolated north with riding the mechanical bull in Ton Sai can book dives at Long Beach, with either Blacktip Scuba or Long Beach Divers.

The bottom line is that no matter where you stay, how you get there or what you do, Phi Phi will leave you with loads of memories – or maybe a tattoo.