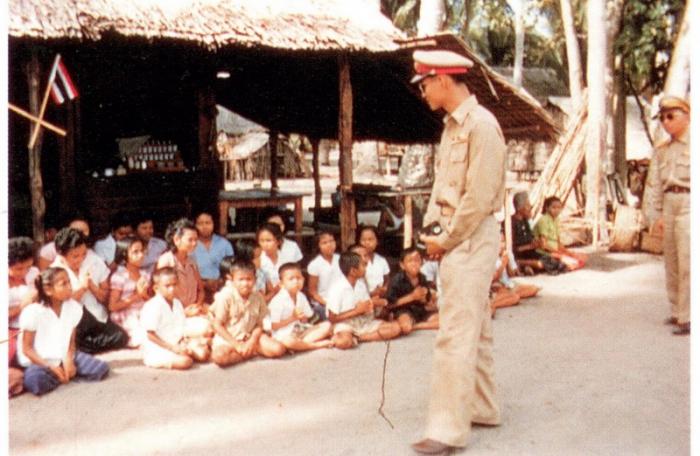 PHUKET: Ngeem Damrongkaset is a member of Rawai sea gypsy community. Now in his 70s, he had a chance to meet His Majesty King Bhumibol Adulyadej when he first visited Phuket in 1959.

“I was about 12 years old at the time,” says Mr Ngeem. “I can still picture it clearly. Every person in our community had gathered together and was anxiously waiting to meet him. I remember feeling so blessed on that day – it was the most important day of our lives. He was the Father of the Nation, and he came to see us – poor people, who did not even have a place to call home.”

Mr Ngeem recalls the excitement of that day with a feeling of gratitude.

“Some adults presented His Majesty with marine creatures they had caught. It was the best we could do, as we could not afford anything else. He accepted all the gifts with his own hands. He even drank water which the community members gave him. I do not think this is something any other King would do,” he says.

“His Majesty and Her Royal Highness Queen Sirikit were graceful and respectful in all the things they did. It really was the best day of my life and I have never felt such joy and veneration in my life,” he adds.

Mr Ngeem says he has been shocked and grieved ever since he heard the news of His Majesty’s passing.

“His Majesty worked tirelessly for the country his whole life. He never stopped or took a day off from his duties. His presence and guidance were a huge blessing for the whole nation,” he says.

Mr Ngeem was born and raised in the Rawai sea gypsy community. He has never been anywhere but the sea, which is the only means of living for his family and community.

He attended a local school called Wat Sawang Arom School, which is located inside a temple close to where he grew up.

“All the kids in my community went to the same school, as they could not afford to enroll anywhere else and were certain to grow up to be fishermen anyway,” he says.

Mr Ngeem says he and his fellow community members try to follow the example His Majesty set for everyone.

“His Majesty worked hard and never complained about it. He helped poor people and enabled them to be self-sufficient. I will strive to keep on doing good things to honor him and his legacy,” he says.

Although Mr Ngeem is no longer in a leadership position in his community, he says he does what he can to help his community members.

“In my role as an elder of the community, I sometimes see some inappropriate things, and do whatever I can to set things right when it is in my power. The best I can do is give advice and let people know what is right and what is wrong. The rest is up to them,” he says.

Mr Ngeem feels that a lot has changed since others from outside the community have settled in the area.

“Earlier, we used to be just fishermen, but now the trend of other types of employment has taken hold. We are who we are, but there is nothing I can do if our younger generation doesn’t want to follow in the same footsteps. It is their future, so they must be the ones to decide,” he says.

“Ultimately, we must follow His Majesty’s advice of doing our duty to the best of our abilities. He will always be in our hearts – our great King, the King of Kings.”

Profile: His Majesty through foreign eyes