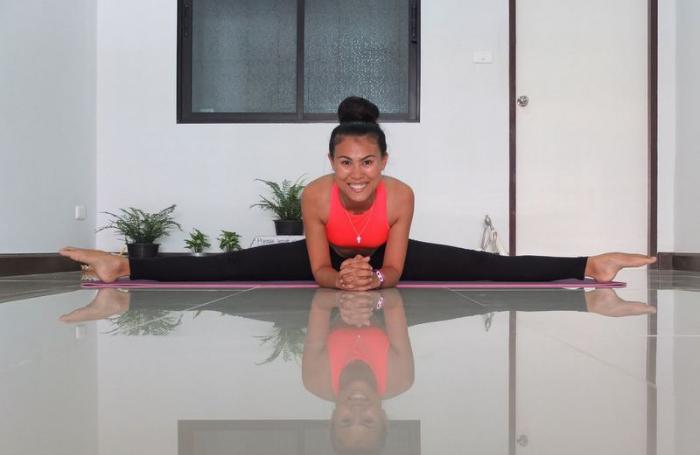 PHUKET: Kanokwan Borunphan, 26, is a yoga instructor in Phuket. Although she started out in the field just two years ago, she already has her hands full with classes and students of various ages.

“I love yoga and practice it every chance I get. When I first started out, I took classes in Phuket Town for two months, but it was very inconvenient to travel there so I took it up on my own. I watched videos and tutorials to perfect my craft and pretty much taught myself to do it,” says Ms Kanokwan.

“I used to have a lot of health problems before, including allergies to dust, trouble breathing because of lung issues, back pain and shoulder pain. Once I started practicing deep breathing with yoga, all my health issues just disappeared.”

Originally from Chiang Mai, Ms Kanokwan first moved to Patumthani to study Management Sciences at Valaya Alongkorn Rajabhat University, where she received a full scholarship and trained for the Thailand National Athletic Team as well. She then moved to Phuket to work as a stewardess on a private yacht.

Although she says she enjoyed both aspects of her professional life, yoga was her true passion and she did what was needed to make a full-time move as an instructor. She now teaches yoga at gyms, private hotels and villas, and also at her own studio.

“In order to provide a quality service, I teach a maximum of five people in one class. I want to accommodate everyone, but if the classes are too big I won’t be able to give everyone individual attention,” says Ms Kanokwan.

“I’m there to guide people as best as I can and help them find the style that suits them best. There are a lot of instructors and everyone has their own style, so it’s never about right or wrong. It depends on what style suits you.”

Ms Kanokwan says that one of the best aspects of her job is helping people manage pain.

“The most common problem with my students is lower back and shoulder pain. It takes two to three months to see a real improvement, but when my students come and tell me how good they feel, it’s the best feeling in the world for me,” she says.

Her students vary widely in age, with the youngest being six and the oldest being 52.

“People always find excuses not to do something. They say they want to do yoga, but they’re not flexible. If you’re flexible to begin with, why join a class? Other times they say ‘I really want to do it, but I don’t have the time. I feel that if they substitute an hour of television with something like yoga, it will be much more beneficial for their mind and body,” says Ms Kanokwan.

Despite her busy schedule, Ms Kanokwan finds time to travel, which is one of her passions.

Her advice to anyone who wishes to try yoga, or anything new in life, is to stop giving yourself reasons not to do it.

“People love taking pills for every little problem. Pills might temporarily stop the pain by making you sleepy, but they don’t fix what’s really wrong with you,” says Ms Kanokwan.

“As you practice yoga, you learn a lot of things about your body. For example, what muscles you utilize when practicing a particular posture. As you learn more about your body, you can use it for your benefit.”