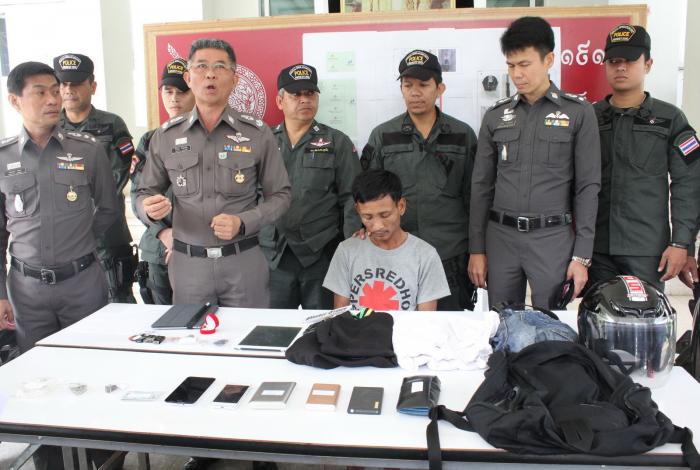 PHUKET: A serial thief who broke into nearly two dozen vehicles during the New Year’s holidays was apprehended on Saturday.

“In two months, Mr Ging broke into cars in Phuket Town, Thalang, Sakoo and many other areas on the island and caused a lot of damage. We observed his actions and collected evidence against him over time,” said Maj Gen Teeraphol.

Gen Teeraphol told the Phuket Gazette that on the day of the arrest, he and his team followed the suspect to Tesco Lotus in Thalang, where it seemed he was going to strike again.

“When we questioned him and showed him the evidence, he confessed to 23 counts of theft, including breaking into a car in Saphan Hin last Thursday (story here),” said Gen Teeraphol.

“He told us that he did so using only a screwdriver, that he worked alone and used to target cars parked in quiet areas. He also mentioned that he learned this skill in prison and spent only five minutes on each car,” Gen Teeraphol added.

Mr Ging said that he sold some of the stolen items to provide for his family and the rest to buy drugs.

“He says he threw away some of the items, such as mobile phones and iPads, that were too risky to sell, for fear of getting caught,” he added.

Mr Ging has a prior criminal record for theft and was released from prison in August last year after completing his sentence.

He has now been charged with theft and damaging others’ property with intention of theft. He was taken to Thalang Police Station for further legal processing.

Police recovered some of the stolen belongings, including cash, a diamond ring, three mobile phones, an iPad, two powerbanks, a purse, two Buddha amulets, 69 thumb drives, three hard drives and many other items, worth about 60,000 baht in all.

Two of Mr Ging’s own bikes that he used to commit theft were also seized. Officials are now in the process of contacting all the victims to come and claim their belongings.