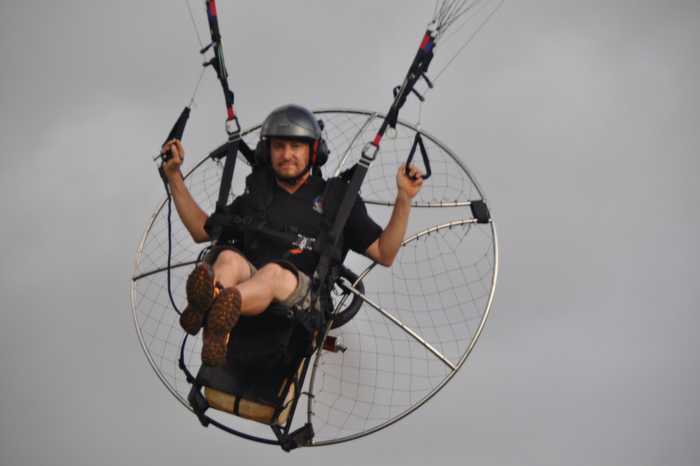 PHUKET: Picking up from where we left off last with “Up in the Air” (story here), let’s jump into the effect the southwesterly monsoon-season weather has on paramotoring…

“The weather isn’t perfect every day, but when the skies clear the visibility is amazing,” explained Sky Club Asia co-owner Paul Derstoff, adding that safety was of paramount importance and that weather conditions had to be monitored closely at all times of the year.

Paul sees a great deal of growth opportunity for the sport here on the island.

“The sport is new to Phuket, and a community will form with our help. We see big potential for Phuket residents taking up this sport as a way of experiencing something new and fun,” he said.

To many casual observers, paramotoring appears dangerous, but Paul and co-owner Mark Silverberg insisted that it is much safer than it looks.

“Most people are just not aware how low and slow a paramotor can truly fly. This type of flight is more like surfing is to sailing. Pilots can enjoy the air just one meter above the ground. If you are coming to visit us at the AirPark by motor scooter, I would say that drive is hugely more dangerous than the flight,” Paul said with a laugh.

“The only major safety variable is the weather. We fly only in the best conditions, usually early morning and late afternoon. All of our equipment meets and exceeds all EU safety norms and our pilots have years of experience flying in different countries.

Essentially, what we are flying is a big parachute that is designed to glide, even without the motor. Sometimes we turn off the motor in flight just to enjoy the sensation of gliding like a bird through the air,” Paul said.

Because of their configurations, paramotors are sometimes referred to as “butt fans” by some enthusiasts.

“We fly ‘low and slow’, so we feel the winds more than a conventional airplane. In order to get the best out of the day for flying, our time windows are usually from sunrise to about 10am, and from 4pm to sunset. We don’t fly unless the wind conditions are absolutely safe,” Paul said.

So far, so good for Paul and Mark, who have more than 700 and 3,500 hours of incident-free flying time, respectively.

The team is now preparing for the coming high season, when flight conditions are normally fine and there is more potential to find new pilots on the island.

“We have eight training paramotors. These are fully registered and insured aircraft in Thailand. We currently operate with two instructors in Phuket and two in Hua Hin, but will have more as the high season starts,” he said.

One of the biggest misconceptions about paramotoring among the general public is that there are no rules and regulations, and you can go up and do whatever you want, explained the Sky Club owners.
“Actually, there are rules and regulations to follow. You don’t need to file a flight plan, but you do need a pilot’s licence and airworthiness certificate for your equipment. There are also rules about the airspace and where you can fly,” Paul said.

The licensing process can be completed in under two-week’s time, and foreigners are allowed to own paramotor assemblies in Thailand.

However, there is still a great deal of room to maneuver and one can fly to a maximum altitude of 1,000 feet anywhere in Phuket, apart from the 10 nautical mile restriction zone around Phuket Airport.

For those who take a test flight and want to get more involved, Sky Club Asia has instructors ready to teach foreigners in English as well as Spanish, French and German.

The company is also a dealer for a full range of equipment, including the aptly named “Xcitor trike” developed by the German-based firm Fresh Breeze.

“Paramotor has evolved from its roots in paragliding and is now actually more of a powered paraglider. Many years of further development has made it one of the safest forms of flying and is great fun for everyone,” Paul said.

Adding to the safety is a ballistic rescue parachute that can lower the paramotor to a safe landing in case of an emergency above 100 feet.

For people who want to experience their first feel of paramotoring and have no experience, Sky Club Asia now offers 20-minute introduction training flights with certified instructors for 4,600 baht. Full courses are available for 30,000 baht.

Phuket health: Top 10 liver questions you should be asking