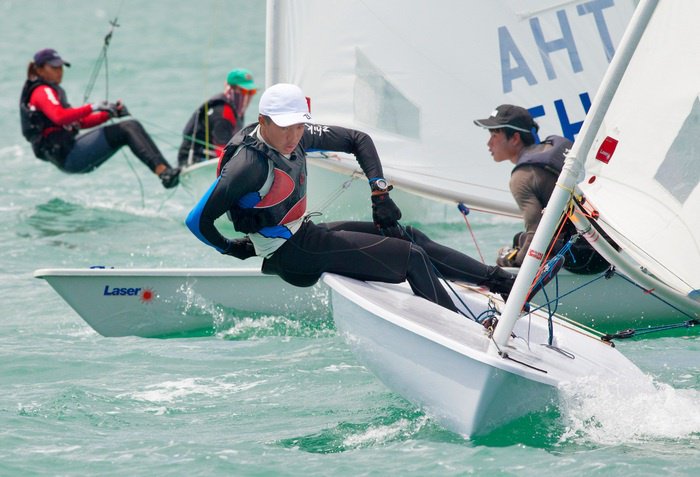 PHUKET: Thailand has a very strong national youth sailing team based in Sattahip in the Gulf of Thailand. Run by the Yacht Racing Association of Thailand (YRAT) they have had increasing success on the international stage in recent years.

The breakthrough happened in 2010 when a young Thai girl called Noppakao Poonpat won the Optimist World Championships. Not only did she win the women’s division, but she beat all the boys and was the overall World Champion. Noppakao is part of the Poonpat family sailing dynasty and while most were shocked to see her win, YRAT and those close to her in Thailand were not.

At the same event, the Thai team went on to win the Optimist World Team Championships for the first time.

Since 2010, the national youth sailing team has picked up regional and international trophies and a treasure chest full of medals with increasing frequency, including again being crowned Optimist World Team Champions in Argentina last year.

The Optimist is a global class of boat that is recognized by the International Sailing Federation (ISAF) and is considered the starter class for youngsters. It is a single-handed one-design dinghy that you can find in almost every country in the world.

Once youngsters reach the age limit of 15 years they look to move on to something bigger and the choice of boats increases. If you wish to continue competing in national and international competitions, then the Laser, 420 and 470, are common classes in this region. However, the number of boats is limited.

While YRAT has over 150 Optimists, their Laser fleet is small and when you look at 420 and 470 they have only a handful. Similarly, the new high-tech 29er and 49er are hard to come by in Thailand and YRAT have very few for training and competition. Either the Thai youngster buys their own or their interest in sailing dies out, and it is the latter that has become a chronic problem in Thailand.

As they get older, there are even fewer Thai sailors who move up from dinghies to larger keelboats or multihulls. As the opportunities decrease, so does their interest and this is a crying shame for Thailand’s marine industry.

One Thai sailor, however, has managed to buck that trend.

Sailing came into Patinyakorn (aka Gin) Buranrom’s life late. He never went through the national team ranks. He came to Phuket for work and through his job at the time picked up sailing skills. He then joined local races at the Ao Chalong Yacht Club and worked his way to buying his first boat, a Hunter 24.

His passion and drive made him a determined individual and since those early days he has built up a Thai team, and they now compete in the regattas around Thailand and Malaysia on his latest boat, the 42-foot Windstar.

Ging is an exception.

While there are other Thai sailors who crew boats in regattas and others who own their own boats and compete, the younger generation of Thai sailors are not coming through. The sport is loosing them.

After starting out on the single-handed Optimists dinghies or similar boats, there are few opportunities for these Thai sailors to work themselves up to larger boats and keep their hobby and interest in sailing alive, and this does not bode well for Thailand’s marine industry.

In Phuket the Ao Chalong Yacht Club provides sailing lessons as does the Phuket Youth Sailing Club. Both are privately run operations and both deserve a lot of credit for trying to get youngsters of all nationalities into sailing. However, more needs to be done.

More grassroots support is needed to help foster this endeavor and ultimately the people who will benefit most, down the line when these youngsters are older and still enjoying sailing, buying new boats and maintaining them, is the marine industry itself.

Perhaps its time for Phuket to take the initiative.