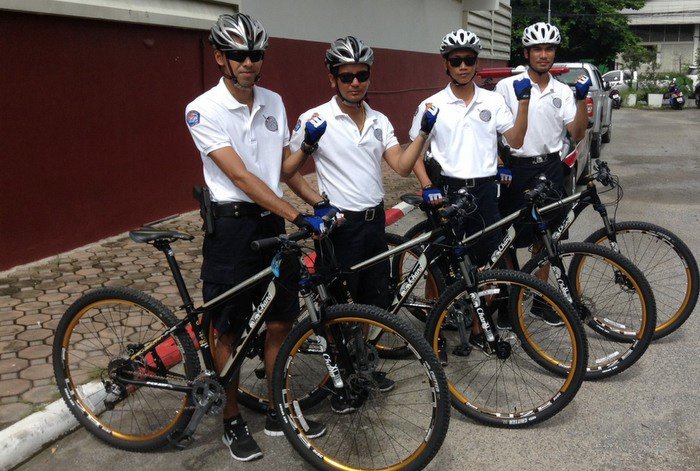 “Things are going well. However, we will run the program for a bit longer before we do our own evaluation and source community feedback,” Col Peerayut said. “It’s just too early to know what the exact impact of the program is going to be.”

On August 14, island officers hit the beaches on two wheels as the Phuket Provincial Police deployed the new patrol force with the idea of boosting tourists’ and locals’ confidence in their safety, as well as benefit the officers’ health by having them exercise (story here).

“At least the beach police are making people in the area feel safer and deterring criminal behavior,” said Col Peerayut.

Officers in Kata and Karon are conducting a total of eight patrols a day, some of which are after dark, confirmed Karon Police Superintendent Sompong Boonrat.

“We received four more bikes for our police officers to conduct patrols,” Col Sompong said. “Even though we have not been allocated more officers to carry out the patrol, we are doing our best to ensure everyone’s safety.”

The idea for the project was first announced to the public by Phuket Provincial Police Commander Patchara Boonyasit last November (story here).

Phuket’s police officers are heading to the beach, and they’ll be getting there on 384,000 baht worth of high-tech mountain bikes, with all the kit generously donated by ThaiBev. Video: PGTV