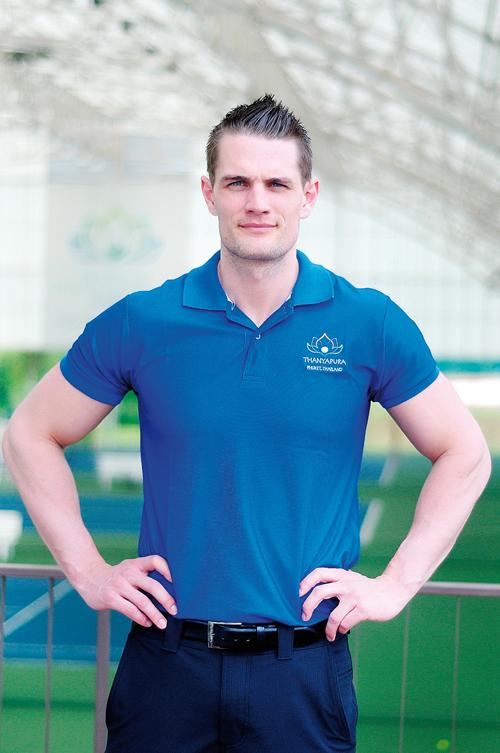 PHUKET: Brian Finniss, the newly appointed operations manager for Thanyapura Sports and Leisure Club lives by this simple motto: “Be committed to do what it takes to have what you want.” For many people, managing an international brand like Thanyapura is something that comes with age, but this young Canadian export is a definite exception to the rule.

Mr. Finniss is an energetic young man with experience working and competing in the world of international sports. He has played basketball professionally in Europe and Australia, and has an extensive resume of facility management roles in North America, Europe and the Asia-Pacific region.

Having obtained a degree in Kinesiology from Acadia University in Canada, Mr Finniss has put his knowledge to use in several sports related positions. He previously worked as the manager of Strength and Conditioning/High Performance at Pacific Sport one of the Canadian High Performance Development Centers. Before that, he worked in Australia with a professional soccer (football) team in the Hyundai A-League and Asian Champions League.

In his role as an Operations Manager at Thanyapura – an ambitious, world class sporting facility which includes Asia’s first dedicated sports hotel – Mr. Finniss points out that continuing Thanyapura’s growth and development as a world class facility is his ideal goal.

“My goals in this role are to help continue the growth and development of the Thanyapura brand both here in Thailand and also internationally. I want everyone to be able to come and experience all that Thanyapura has to offer and leave with a lasting memory of their experiences here.”

Handsome, smart, active and energetic are all words that can describe Mr. Brian Finniss. He enjoys playing sports, such as soccer in his free time, “I need to be doing something physical!”

When asked about the biggest attraction of working and living on the island, he says that Thanyapura’s international reputation was a big draw.

The biggest attraction for me to come here to Phuket is without question Thanyapura. I had heard about Thanyapura from colleagues of mine in Canada and the more I looked into what it is they were doing here, the more and more I wanted to be a part of it.

“The opportunity to be a part of the growth and development here was something I really wanted to be involved with, but obviously, the tropical weather is a bonus as well. Being from Canada we don’t get too much of that!” he said.