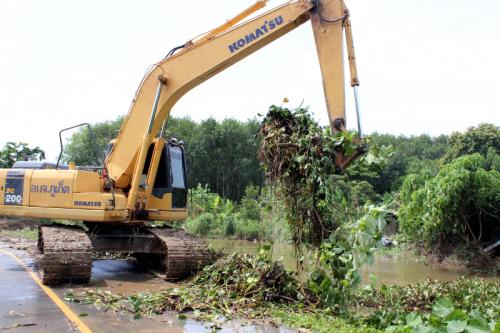 PHUKET: Acting early to prevent the flooding, and stagnant water, that plague the Ban Yai Canal area in Srisoonthorn every year, officials took action yesterday to remove the culprit: water hyacinths that grow rampant in the canal.

“We hadn’t received any complaints about the problem this year, but we were concerned that it would happen again, so two weeks ago, we went to inspect the area. We found lots of water hyacinth in the canal, and the water had already started to smell,” she said.

Left to grow uncontrolled, water hyacinth can block sunlight from reaching other aquatic plants and starve water of oxygen, killing marine animals. The plants also create a habitat for mosquitoes.

“It’s especially important to clear the canal since dengue is a concern in Phuket now,” said Ms Somjit (story here).

“We want to protect the health of the people who live along the canal and also prevent foul water from flowing from the Ban Yai Canal into the Tai Yang Canal and out onto Layan Beach.

After the plants have been removed, the water will be tested and treated if necessary, Ms Somjit added.