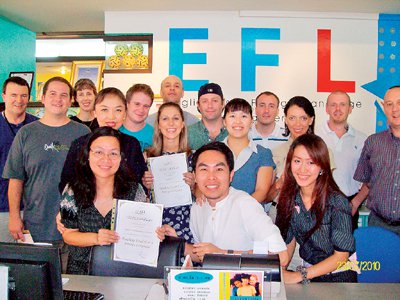 The opening sentence of that story read, “The Phuket Primary Education Area Office has relaxed the requirements for foreigners to be hired as English-language teachers at government schools in Phuket.”

Almost immediately after publishing the story, optimistic job seekers flooded the Gazette‘s office with questions asking which schools on Phuket were hiring and where to go about applying for vacancies.

Considering the article’s content, who could have blamed them? Unfortunately, the reality of the situation is that no official change has occurred in terms of a relaxation of requirements.

In the article, Phuket Primary Education Area Office Director (PPEAO) Jian Thongnoon is quoted saying, “Ideally, we have to hire teachers specifically trained to teach in English. Just hiring native English speakers is not really worth it because these people do not have teaching skills. However, in the meantime we will have to hire teachers who just have English skills until we can find qualified teachers who have both English and English-teaching skills.”

Yet it’s the Teachers’ Council of Thailand (Krurusapha) that sets requirements for foreign teachers’ qualifications and their policy on this issue has remained constant since 2006:

Applicants who do not possess a degree in education, or a degree and a license to teach “from abroad” must pass the TCT’s Professional Knowledge Tests – of which there are four.

In the meanwhile, applicants’ employers may request exemptions after applicants have attended the Thai Language, Culture and Ethics course and registered to take the first of the TCT’s exams. Then and only then are teachers provided with a two-year provisional teaching permit.

So while it’s understandable that the average reader might have taken Director Jian’s comment, “we will have to hire teachers who just have English skills” as a relaxation for more basic regulations such as a university degree, that simply is not the case.

Applicants who do not hold degrees are still routinely turned away before being granted interviews. Of course teachers without degrees are working in Phuket’s school, but in those cases, schools are working around the laws, not relaxing them.

Another potentially misleading statement suggested, “Schools in Phuket Town are struggling to attract native English speakers as teachers.” Director Jian suggested the PPEAO needed 50 teachers and still another quote from Phuket Provincial Administration Organization (OrBorJor) President Paiboon Upatising read, “We have been announcing that we need English teachers, but there have been very few applications.”

If Phuket’s OrBorJor is struggling to attract teacher applicants, it’s certainly not due to a lack of foreign teachers looking to work. Nearly every month, Phuket’s numerous TEFL training course providers graduate a plethora of certified job seekers who have degrees. These teachers look on job boards, they look in the papers, they routinely ask teachers who are already employed if they know of any jobs going. Yet the overwhelming feeling amongst job seekers is that positions are full.

Rather than suggesting Phuket Town is struggling to attract teachers, it would seem Phuket’s schools are struggling to communicate their vacancies.

Ajarn.com’s job board only lists openings at Kajonkiet, Phuket’s classified ads list only sporadic vacancies and the word-of-mouth openings have dried up since the most recent hiring push in September.

The article also went on to report that one reason for the staff shortage was that teachers were applying for early retirement. These vacancies will more than likely be filled by Thais working under a different salary structure (a lower salary with considerable benefits reserved for Thais) or actually reserved for Thai government officials working as teachers (kru kharajagarn).