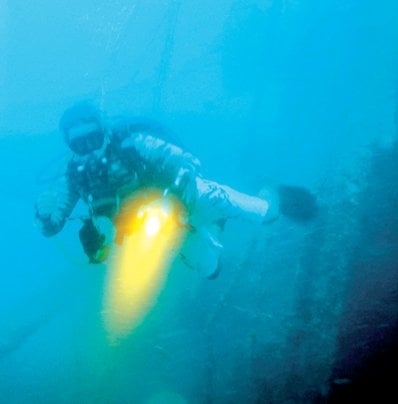 PHUKET: The descent line disappeared below us after we splashed in above the Sea Charter, one of the few diveable wrecks off the coast of Khao Lak.

There is a long moment between leaving the sunny surface of the Andaman Sea and the first hint of the ship’s shadow blackening the blue water below us. In that moment I found myself clearing my ears again and going back over the dive briefing, reviewing all the details of the wreck that Markus Hippel, the manager at Sea Bees Khao Lak, had gone over last night.

The wreck is a cargo ship about 80 meters long, lying on its starboard side with its cargo of teak wood still on board. The ship had departed with the cargo from Burma in August 2009, heading for Vietnam, but was caught in bad weather and ended up on the sandy sea floor 38 meters from the surface, not far from the recreational depth dive limit of 40 meters.

The real question I kept asking myself as I followed the line down was: what is the wreck like now? It’s the question every diver asks before a wreck appears. Even a wreck as young as this one was bound to have started to break apart and become a haven for sea life.

Markus had explained that Khao Lak wasn’t known for it’s wreck diving, being in fact the premier jump-off location for liveaboards heading out to the Similan Islands.

“People are coming to dive the Similan Islands because they are one of the 10 best dive sites in the world,” he said in a light German accent.

He went on to explain that many of the divers that booked with Sea Bees got on board with one of the two liveaboard trips they offered. However, tomorrow we would be taking a day trip out in the beautiful teak hulled Runaway to do a little wreck diving.

The nervousness of diving with Nitrox, instead of compressed air, which I hadn’t done in some time, was mostly calmed by Andrea Filippazzi, an Italian dive instructor new to the Sea Bees team, and it totally dissipated once the wreck came into view. With the wreck in front of me I knew the extra bottom time given by the Nitrox wasn’t to be taken for granted.

We swam down past the wreck’s silty hull to the vertical lying deck, with Andrea confidently leading the way. The wreck is shallow enough that there wasn’t an eerie stillness to it. In fact, it was bustling with life. We dipped into the bowels of the hull, keeping our heads down to avoid the myriad of sharp oyster shells already cemented to the ship. Long beautiful timbers of teak passed below us and then we were out into the open water again.

Snagged fishing nets hung around the wreck’s tower like shredded sails. Slowly we worked against the mild current towards the stern of the ship to see the enormous propeller still above the sand.

After 32 minutes of bottom time and our safety stop completed, I was ecstatic to have just been aboard the Sea Charter. A pleasant drowsiness set in after we had a delicious German style lunch. I closed my eyes and started diving the Sea Charter again, wondering what it would have been like to slide past the broken glass of the ship’s tower window and find what mysteries lurked inside.