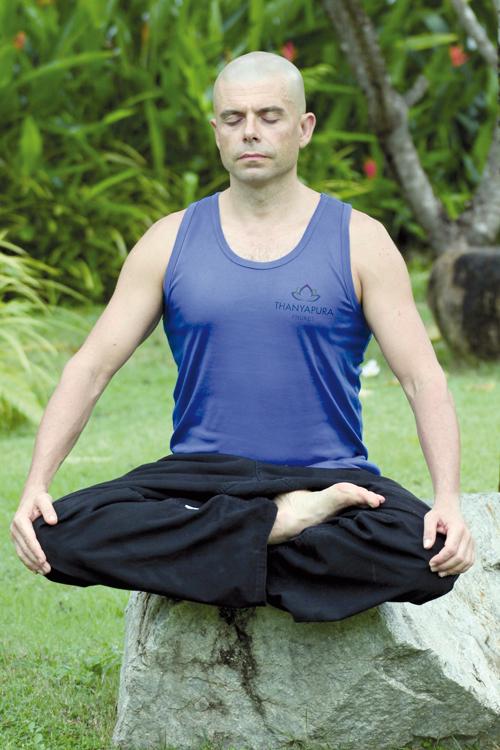 PHUKET: Among the most advanced and well-versed of Western Buddhist meditation gurus in the country and the region, if not the world, Andrea Capellari is Thanyapura’s esteemed Mind Trainer. Teaching meditation regularly to hundreds of students, the Italian-born, highly proficient, intelligent and disciplined Buddhist also leads intensive meditation retreats.

The Phuket Gazette‘s Steven Layne recently enjoyed an enlightening lunch with Andrea. Following is the first part of their Q&A session, with more to follow in the near future.

Phuket Gazette: Most people associate training as a physical activity. What exactly is mind training?

Andrea Capellari: The way the mind, and the way the body works and can be trained, is very much the same. The mind and body are trained on a continuous – let’s say repetitious [basis]. For the body, you train in a gym, on the track or in a swimming pool. You train your mind in a certain type of environment too – a mental one.

If you train your mind and restore mental balance, then anything you do with your mind (mental functions) is going to be improved. Whether a top level manager with decision making or strategy that needs to be planned; a triathlete or Olympic swimmer looking to enhance their endurance or just a house wife who needs to “de-stress” – mind training will prove beneficial.

No matter what you do, the mind is like a control room, so it’s better to have it nicely equipped and maintained. The goal is to become more focused, stable, peaceful, quiet, aware and mindful so then you have a range of different kinds of qualities that will be enhanced.

What exactly is stress, and how can mind training help?

Stress is a psycho-physiological state naturally occurring when we face an event that we interpret as surpassing our threshold of comfort. When that happens, the brain activates the sympathetic nervous system (SNS), causing our body to produce and release certain hormones into the blood flow, namely adrenaline and cortisol.

In nature, after the stress has activated the SNS as a survival mechanism, it will be followed by an opposite and balancing reaction – the arousal of the parasympathetic nervous system (PNS), which activates what can be described as a process of “de-stress”. When these two systems work together in sync, we experience a detox process. However, if the SNS is triggered but is not balanced by arousing the PNS, then there will be excessive hormones in your body, which can be toxic for health.

The balancing of these two systems can easily be seen in nature. Following a stressful or traumatic incident, such as surviving a car accident, for example, the first thing a dog will do is run. It will run and keep on running as a way to arouse the PNS, and that’s how the dog is able to de-stress.

Another example, in Asia there is an antelope that has its own unique reaction, or defense mechanism to a tiger attack. When most animals realize that there is a tiger nearby, their instinct is to run. But this particular antelope will instead drop to the ground, and all of its muscles will freeze at once.

As soon as its brain realized the threat, it triggered a reaction in the SNS, pumping blood into the muscles and limbs to make them rigid. When the tiger moves in, there is a good chance that it will be fooled into thinking the antelope is already dead, and since tigers prefer a fresh kill, it will then move on. When the tiger’s out of sight, the antelope rises up and shakes itself for some time, about 5 to 10 minutes. This is a function of pns arousal.

With humans, stress is becoming more common with increased urbanization, congestion and overcrowding. It’s like when you put an animal in a small cage, it will quickly become stressed and unless you let it out, will become miserable and its health will decline.

Likewise, humans also need to de-stress, and activate or arouse their PNS. With modern fast-paced lifestyles, most have forgotten, or perhaps never learned how to correctly and effectively do this. The obvious ways are through doing exercise, yoga and other cardiovascular and physical activities.

While the physical arousal is important, one cannot underestimate the mental side. Meditation, through application of correct mind training techniques, is one of the most effective ways to activate and arouse the PNS, compensate SNS arousal and thus de-stress.

Who are your daily meditations sessions (10-11am and 4-5pm) ideal for?

The sessions are open to all Thanyapura members, including faculty and members of TSLC, PIADS parents, students and teachers; patients at the integrated health clinic, as well as guests at our retreat center and Sports Hotel. Some members can’t always attend regularly depending on their schedules, and we also get a lot of new guests, regularly. Sometimes there are 10-15 people, sometimes only two.

At least for now, I will usually give an introduction to mind training for new members. There are many reasons why people come to meditate. Some want to find mental and emotional balance, others need it for detox and of course many want to de-stress.

We also have a lot of athletes who seek mental reinforcement for their physical training regiment, for example.

Is there any advantage of meditating in a group as opposed to solo?

It depends on the purpose, experience and expectations of the person meditating. Although professionals, or those who are able to meditate at a higher intensity in terms of frequency and duration, will be able to achieve their goals by meditating solo, this is not necessarily true for beginners who need more guidance and direction.

Until one has reached a certain proficiency in meditation, it is recommended to meditate with other people for the optimal benefit. In a group, there is what we call mutual support. This mutual or collective support can be measured by observing brain activity or brain wave patterns. In group meditation, the brain waves can be shared, and it is possible for a proficient leader to assist a beginner to reach a certain state quicker, and with a lot less effort, by inducing certain brain wave frequencies.

Save a life, get a friend