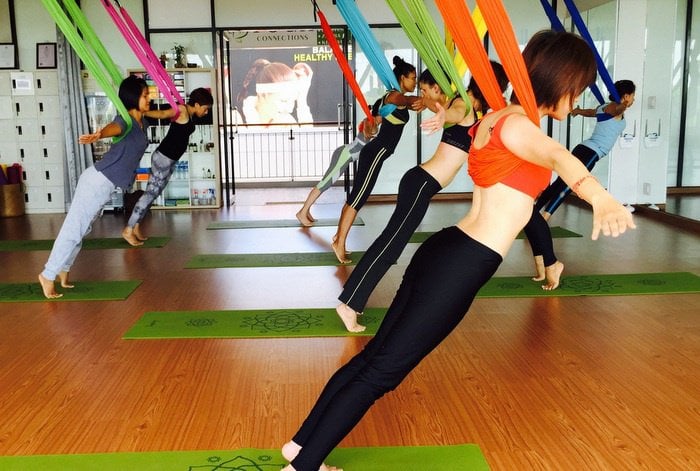 PHUKET: Aerial yoga, widely known as ‘anti-gravity’ yoga or ‘flying yoga’, is now available in Phuket, as it takes Asia, Australia and the rest of the world by storm.

The new form of yoga, the first classes reportedly having been taught by Michelle Dortignac in New York City in 2006, takes adaptations of traditional yoga poses and combines them with the circus art of aerial silks to create a playful, challenging and rewarding practice.

“It’s really just started taking off in the last year or so, and it’s not just here; it’s everywhere… everyone is doing aerial yoga,” says Kim White, who has been teaching yoga on Phuket for the past six years and now teaches aerial yoga at Yoga Connections in Chalong.

Unlike many traditional forms of yoga, aerial yoga demands a great deal from the studio, including sturdy ceiling anchors to hang the hammocks from. However, it was an investment that Yoga Connections saw worthy of the fun and health benefits that can be derived from the practice.

The hammocks and anchor points can support a weight of about 150 kilograms, so larger clients really have nothing to worry about, says avid yogi and owner of Yoga Connections Pomme Thongmuang.

The material of the hammock is the same material you’ll see performers using on the stages of Cirque du Soleil and even at Phuket aerial performances, which are becoming a popular part of almost any big opening event.

“It’s fun. I call it going back to your ‘monkey bar’ days,” says Kim. “There are times when you see these people who are a little bit trepidatious when they start, but at the end have this massive, 4-year-old grin on their face.”

Apart from bringing out the child in us, aerial yoga has a number of additional health benefits, including improved circulation, structuring a person’s shoulders and decompression of the spine and joints, she adds.

“It’s awesomely core. The structural alignment in my shoulders has improved, stability and strength have improved,” says Kim, who teaches the course several times a week. “It’s a good cross-trainer for other arts as well.”

The students at Yoga Connections agree.

“My body feels more flexible and I’ve even lost a little bit of weight,” says Give Vanichkul, who regularly makes her way down from Phuket Town to join the class.

Lindsay Rose, another student, points out that aerial yoga is a good jump-off point for those wanting to participate in other aerial sports.

“I like to do aerial sports like aerial hoop, aerial silk and pole dancing. It’s a good way to start, it’s not too difficult. It’s a challenge. It’s a good challenge to start off with.”